In what has become a busy month for HP, the company has continued to update its array of laptops and other portable PCs with new Intel processors. The latest HP laptops to get the refresh treatment are the Pavilion x360 14" convertibles, which are being retooled to use Intel's 10th generation Ice Lake processors. Launching today, the two new HP Pavilion x360 14 series models are aimed at increasing productivity on the move with a couple of interesting features, including optional support for 4G LTE offering better connectivity on the go. Based on an improved lightweight design, the new HP Pavilion x360 14 is one of its thinnest yet, with a depth of just 18 mm and weight of 3.55 lb.

The new HP Pavilion x360 14 will be available in two configurations – a mid-range config and a low-end config – both sharing the same compact and lightweight frame, but with differing specifications. Both feature a 14" diagonal IPS touch screen panel which can be flipped 360 degrees to be used as a traditional laptop, or as a tablet with its edge-to-edge glass. Integrated into both models is a set of premium Bang & Olufsen speakers with the onus on entertainment, with HP claiming up to 13-hours of battery life based on FHD video playback. 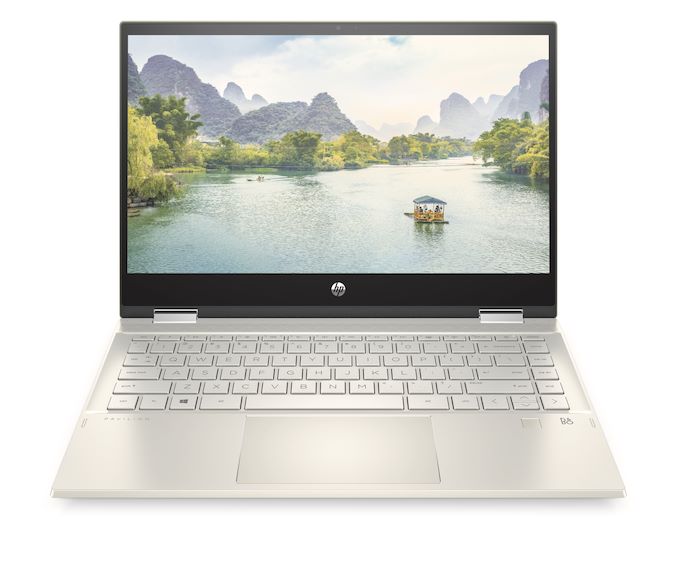 As for the individual configurations, starting with the mid-range config, we have the HP Pavilion x360 14M-DW0023DX. This model is based on an Intel i5-1035G1 quad-core processor and comes with Intel AX201 Wi-Fi 6 wireless interface, 8 GB of DDR4-3200 memory in single-channel mode, and a 256 GB PCIe 3.0 M.2 SSD. It uses Intel's integrated UHD graphics to power a FHD 1080p IPS panel, which offers a brightness of up to 250 nits, and benefits from a luminous gold aluminium anodized frame; for those who demand elegance.

Meanwhile the lower-spec model, the HP Pavilion x360 14M-DW0013DX, includes an Intel i3-1005G1 dual-core Ice Lake processor, with 8 GB of DDR4-3200 memory (also in running in single-channel mode), and a slightly lower capacity 128 GB SATA based M.2 drive. This model also has a lower resolution 1366 x 768 screen, which has a brightness of 220 nits and a vertical brush patterned finish. For wireless connectivity it uses an Intel AC 9461 802.11ac wireless interface which also has support for BT 5.0 devices. 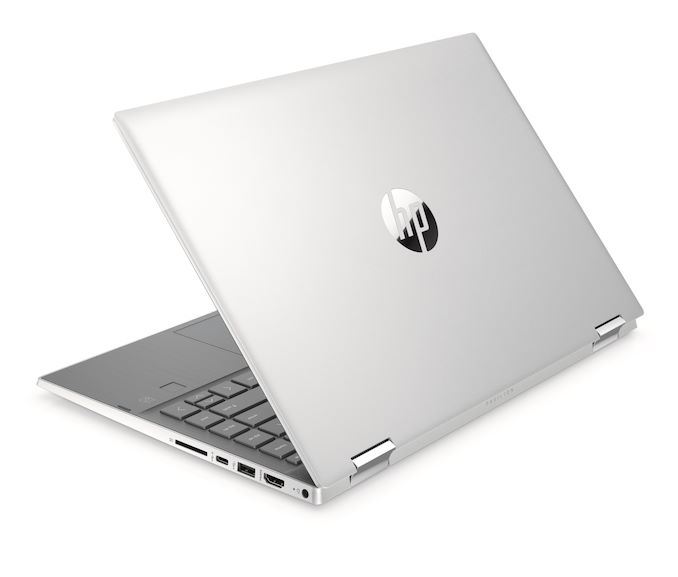 Since both configurations use the same body, they have the same 32% screen to body ratio, with a weight of just 3.55 lb and a thickness of 18 mm. There is also an HP Wide Vision HD webcam with a dual array digital microphone integrated, an HP Imagepad with multi-touch gesture support, and both models include a 3-cell 43 Wh Li-ion polymer battery. As for I/O, both models include a single USB 3.2 G2 10 Gbps Type-C port with DisplayPort 1.4 support, two USB 3.1 G2 Type-A ports, a headphone/microphone combo port, and a single HDMI 2.0 video output.

On top of the two models that's been launched, HP notes that the Pavilion x360 14 series will support up to 1 TB of SSD based storage, and be available with optional 4G LTE support. HP hasn't unveiled specifics as of yet, but we expect models to be available from HP featuring this soon.

Prices start at $499 for the Intel Core i3 Ice Lake model in a natural silver finish, with the higher-spec Core i5 model launching at $749 in warm gold. Both models are available now at Best Buy, and come next month HP will also be offering models in Forest Teal, with prices there starting at $550.