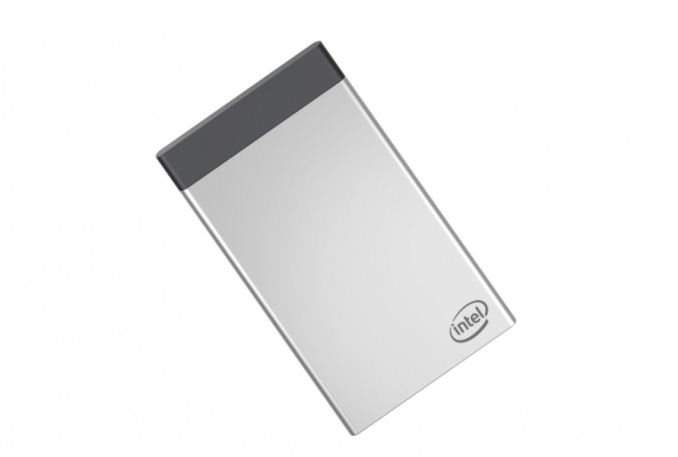 Intel unveiled its credit card-sized Compute Card at CES earlier this year, and now at Computex, the company has brought us up to speed on the available SKUs and the release date.

The Compute Card comes packed with the full functionality of a standard computer, including an SoC, connectivity, storage, and memory in one slim device. The device slots into a range of devices from laptops, tablets, and AIOs to interactive refrigerators and IoT gateways. The devices can be ejected and replaced, thus decoupling compute from the device and allowing for easy upgrades as the card evolves into more powerful variants. That could also make for interesting new laptop platforms with longer shelf lives.

The Compute Card family offers processors that span from Core to Celeron and come in four SKUs. Each respective product has varying compute, storage, and connectivity options, though the processor serves as the only differentiation between the two high-end options. Aside from listing the processors, Intel hasn't given us an indication of performance.

Intel has signed on a bevy of partners to develop new products that leverage the device, including Contec, ECS, Foxconn, LG Display, MoBits Electronics, NexDock, Sharp, Seneca, SMART Technologies, Suzhou Lehui Display, and TabletKiosk. Many of these partners will have products on display at Computex 2017. Dell, HP, and Lenovo are also working on new products, but have yet to reveal any of the end devices.

Intel also released its Compute Card Device Design Kit, which is a set of guides and reference designs that simplify and speed up the product development process.

In many ways Intel's Compute Card signifies the company's continued push for product diversification as it delves into IoT, automated driving, and other lucrative climes. In this case, its efforts also further its objectives in the mobility space, as we can expect new laptops and AIOs to come to market with the new cards installed. The Compute Card will begin shipping in August 2017, but Intel hasn't revealed pricing info.

Paul Alcorn contributed to this report