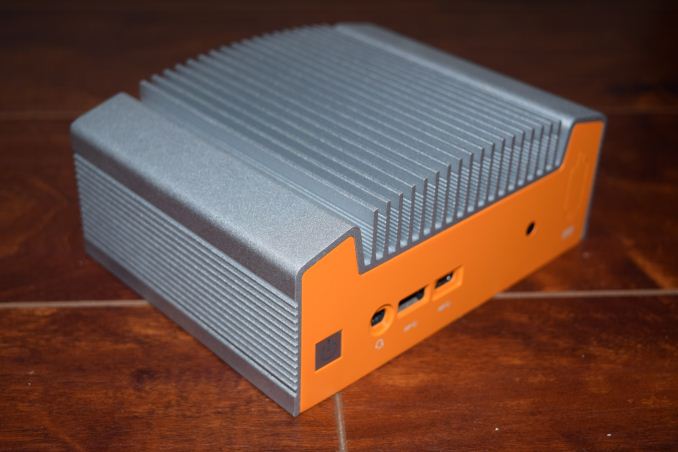 The ML100 series of passively cooled PCs from Logic Supply utilize the NUC / UCFF (ultra-compact form factor) motherboards. Currently, that lineup includes Bay Trail, Broadwell, and Skylake-based units. The ML100G-50 that we are looking at today is the Skylake vPro version.

The ML100G-30 released in early 2015 came with a Broadwell vPro processor and used one of the Intel Broadwell NUC motherboards (NUC5i5MYBE). Logic Supply's expertise in passively cooled systems enabled the replacement of the fan in the kit with an effective fanless thermal solution. The ML100G-50, however, is equipped with an ASRock board that is similar in many ways to the one found in the ASRock Beebox-S 6200U. The main differences between the internals of the ML100G-50 and the Beebox-S 6200U are the processor (vPro-capable Core i5-6300U vs. non-vPro Core i5-6200U), the Wi-Fi card (Intel AC7260 in our review sample vs. Intel AC3160), and the Ethernet controller (I219-LM vs. I219-V, the former being necessary for vPro features). The internal layout (not the motherboard itself) is also slightly different, with the full-metal solution of the ML100G-50 making it necessary to have a couple of RP-SMA connectors in the rear panel. In terms of physical dimensions, the ML100G-50 is the same as the ML100G-30. Due to the thermal solution and the need for RP-SMA Wi-Fi antenna connectors, the dimensions are slightly larger than the ASRock Beebox-S 6200U (142mm x 107mm x 62mm vs. 119mm x 110mm x 46mm)

The full specifications of our Logic Supply ML100G-50 review configuration are summarized in the table below.

Logic Supply allows the ML100G-50 to be customized prior to shipping. By default, the unit comes with 4GB of DDR4-2133 RAM and a 32GB M.2 2260 SATA SSD. There is no WLAN support in the default configuration. Based on the purchase options, Logic Supply can pre-install up to two SO-DIMMs of 8GB each and a Transcend M.2 2260 SSD up to 512GB in capacity. Customers can opt to install their own SO-DIMMs (in which case, they can go up to 32GB of RAM) and/or M.2 2260 SSDs (Note that only M.2 2260 SSDs are officially supported - unlike the Beebox-S which allows M.2 2280 SSDs using an add-on plastic riser tab). Both SATA and PCIe drives are supported, though M.2 2260 PCIe SSDs are relatively rare in the market.

Other customization options include the WLAN card (the Intel AC8260 is available on the Logic Supply purchase page, though our review unit came with the AC7260). wall / VESA and DIN rail mounting kits, port and dust blocking kits, and choice of OS (Ubuntu 14.04 LTS, Windows 8.1 Embedded, Windows 10 Home / Pro / IoT Enterprise LTSB). While the standard warranty is 2 years, $99 extends that to 3.

We installed Windows 10 Pro x64 for the review process, and almost all drivers were available via the regular Windows Update process. The CIR driver (for the IR receiver) and the thermal framework drivers (Intel DPTF) had to be downloaded from ASRock's website for the Beebox-S 6200U 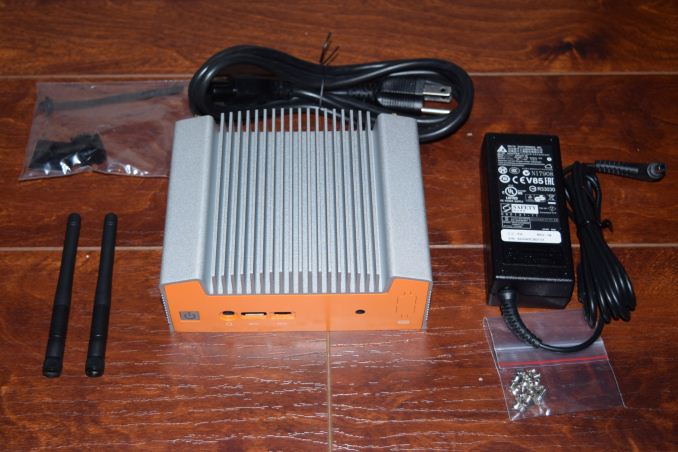 In addition to the main unit, the other components of the package include a 65 W (19V @ 3.42A) adapter, a US power cord, two 2.4 GHz / 5 GHz antennae for the Wi-Fi feature, adhesive rubber feet for the unit's base and a cable management tie along with some screws (probably for the wall mount / VESA mount - which is supported, but not included in our review package). The gallery below takes us around the chassis and also a view of the customer-accessible portion of the internals that allows the DRAM and SSD to be changed.

Note that there is a thick thermal pad right above the M.2 SSD. This should definitely help the drive keep its cool when subject to disk-intensive workloads. The all-metal construction and the finned structure of the chassis sides and top also help in drawing the heat away from the internal components. As usual, we will quantitatively evaluate the effectiveness of the thermal solution in a later section.