Hands On With the New Google Pixel Phones

After Google’s launch event today in San Francisco, I had an opportunity to get my hands on its new Pixel and Pixel XL phones. My initial impression is that they are decent-looking, well-made phones. Google took a more active role in creating these phones than previous Nexus devices, taking the lead not just in hardware selection, but design as well. Using quality displays and not having a camera bump on the back were decisions driven by Google, for example.

The phones share the same design and internal hardware, so my observations apply to both the Pixel and Pixel XL. The aluminum chassis has a sandblasted finish and rounded corners that do not dig into the palm. The back has a distinctive design, with glass covering the top third. This functions as an RF window for the various antennas, but its size seems more cosmetic. I would prefer more aluminum on the back, both for aesthetic and durability reasons, but the partial glass back does help the Pixel stand out from other aluminum phones. The recessed fingerprint sensor sits within the glass region and is easy to locate. The rear camera, dual-color LED flash, laser autofocus module, and a noise cancelling microphone are lined up in the top-left corner similar to the iPhone. The Pixel’s camera, however, sits flush with the back and is covered by the rear glass. 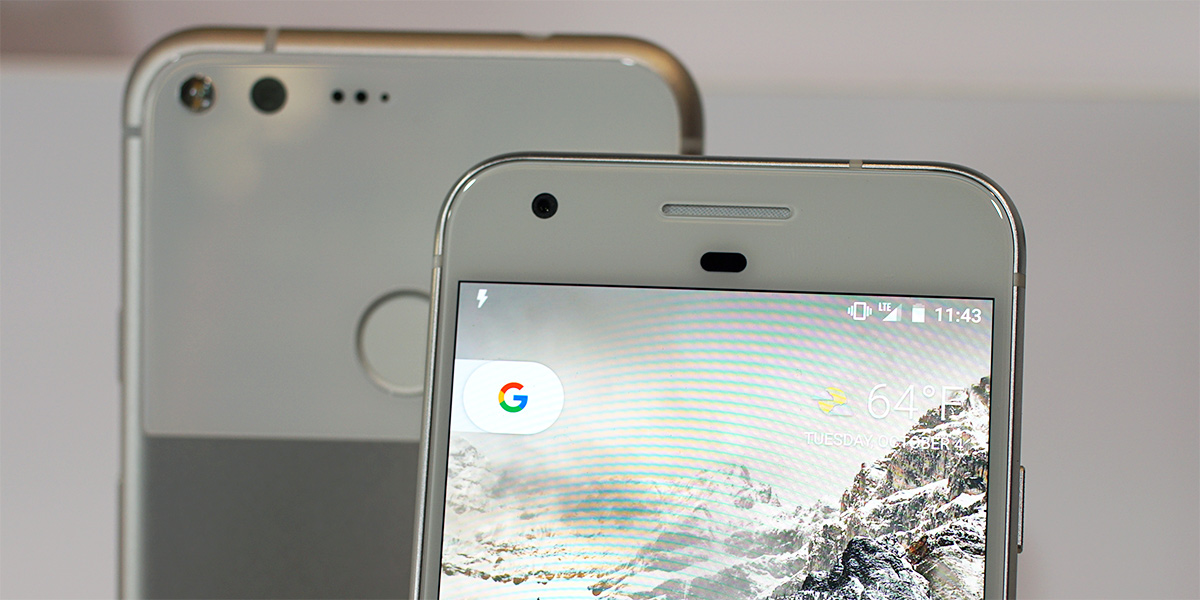 The front is edge-to-edge glass and nondescript. The upper and lower bezels are needlessly large, and there’s a lot of wasted space in the lower bezel, which does nothing but serve as a place to rest your thumb. Instead of using the space for capacitive buttons, or just making the bezel smaller, Google commits two fouls by making the bezel large and then using onscreen navigation buttons. The upper bezel is sized to match, with another curious design choice. The Pixel’s ambient light and proximity sensors are located below the earpiece instead of next to it. It’s possible the large upper bezel is necessary to fit the rear camera above the screen, which is necessary to avoid a camera bulge, but we will not know for sure until we see a teardown. 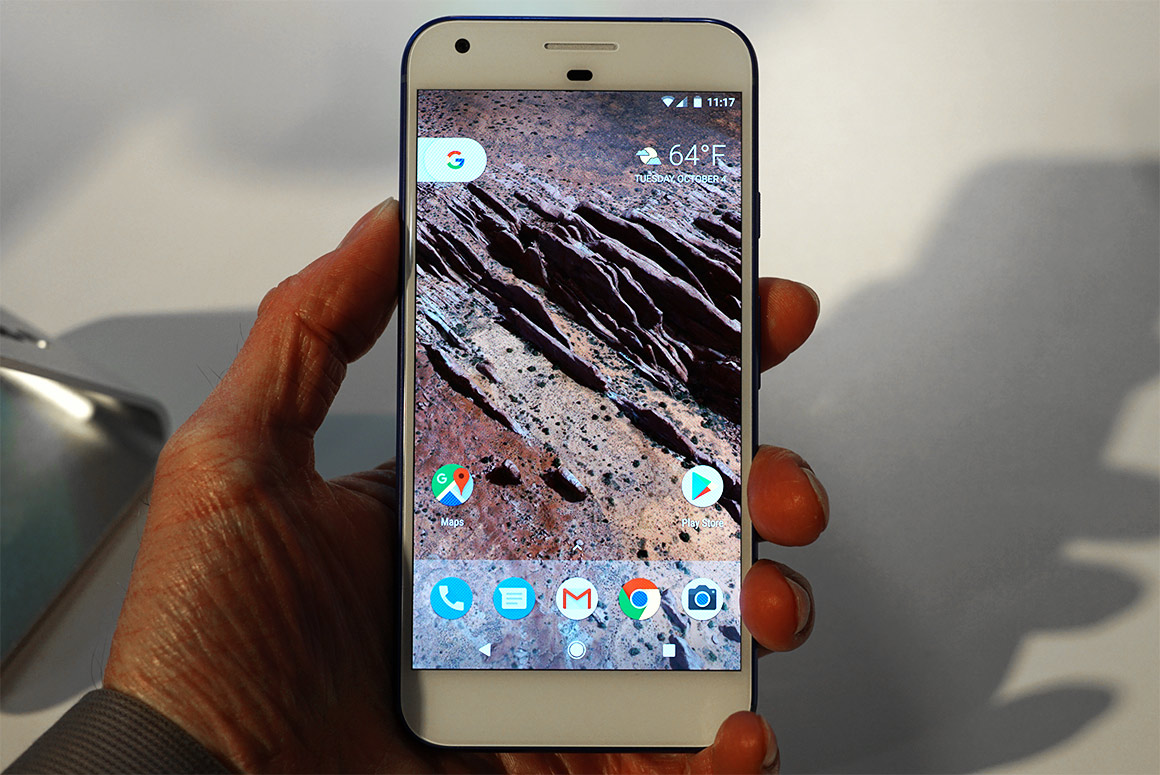 With so much room above and below the display, front-facing stereo speakers would have been nice. Instead, there’s only a single downward-firing speaker. While there are two symmetric grilles flanking the centered USB Type-C port, the second covers only a microphone. At least there’s still a 3.5mm headphone jack located on the top edge. The SIM tray slides into the left side, and both the nicely-textured power button and single-piece volume rocker are on the right side. One thing that really bothers me about the Nexus 6P is the button placement; every time I touch it I inadvertently press the power button, turning it on when I want it to stay turned off or vice versa. The button placement is better with the Pixel phones, with the power button closer to the top, so this should be less of an issue now. 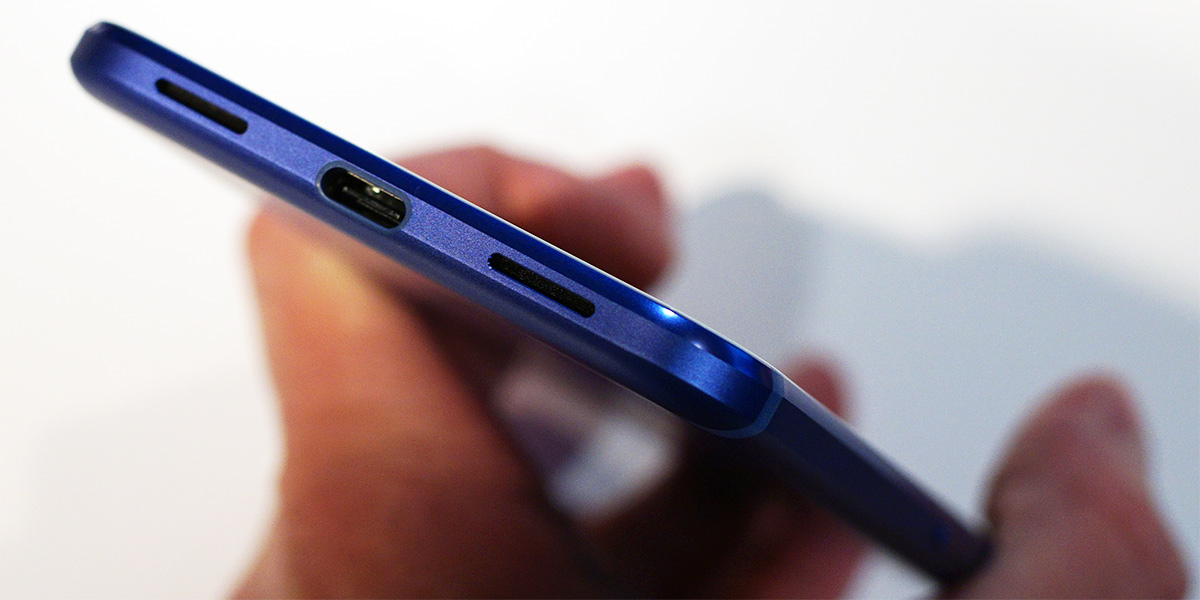 The edges are rounded on the back, eliminating another pressure point, and chamfered on the front, the only place we see a hint of HTC 10 styling. The sides are still flat, which makes it easier to hang on to than an iPhone, but not quite as comfortable.

I did not have too much time to play with the Pixel’s camera, but its autofocus worked quickly and accurately within the confines of the demo room, even when I covered the laser module. The rear camera includes 1080p30, 1080p60, and 4K video recording modes, along with 120fps slow-motion video at 1080p and 240fps at 720p. Electronic image stabilization (EIS) for video recording (the camera still does not have OIS) was one of the highlight features mentioned in Google’s presentation and it's used in all video modes including 4K. While shooting in 4K, however, the preview shown on the display is not stabilized like it is in the other video modes. While testing the camera, I noticed that EIS is used for all video modes up to 1080p60 but not when shooting 4K video [Update 10/13: Confirmed that the Pixel phones do use EIS for 4K video, but the viewfinder is not stabilized while shooting 4K like the other video modes]. There’s still a processing/power hurdle to clear. 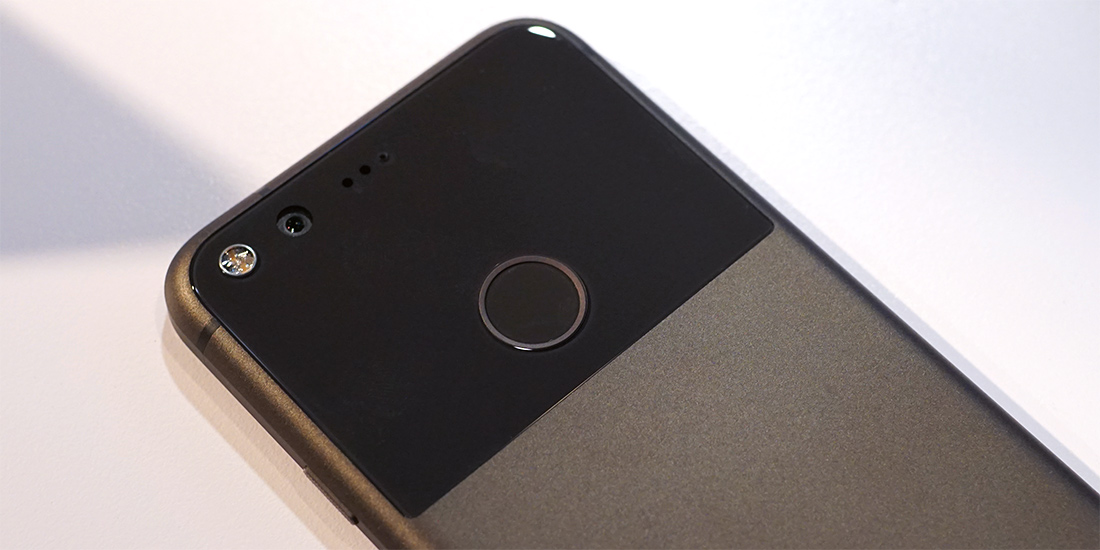 I also spoke with Qualcomm and learned that Google optimized its HDR+ algorithm to run on Snapdragon 821’s Hexagon 680 DSP, taking advantage of vector instructions to enable HDR processing with zero shutter lag. Qualcomm also said this approach consumes less power than running the algorithm on the CPU.

The Pixel phones also use Qualcomm's Aqstic audio codec that's capable of 192kHz/24bit playback, but does not use Qualcomm's Quick Charge 3.0 technology. Instead, it adheres to the USB Power Delivery specification, delivering up to 18W of power. 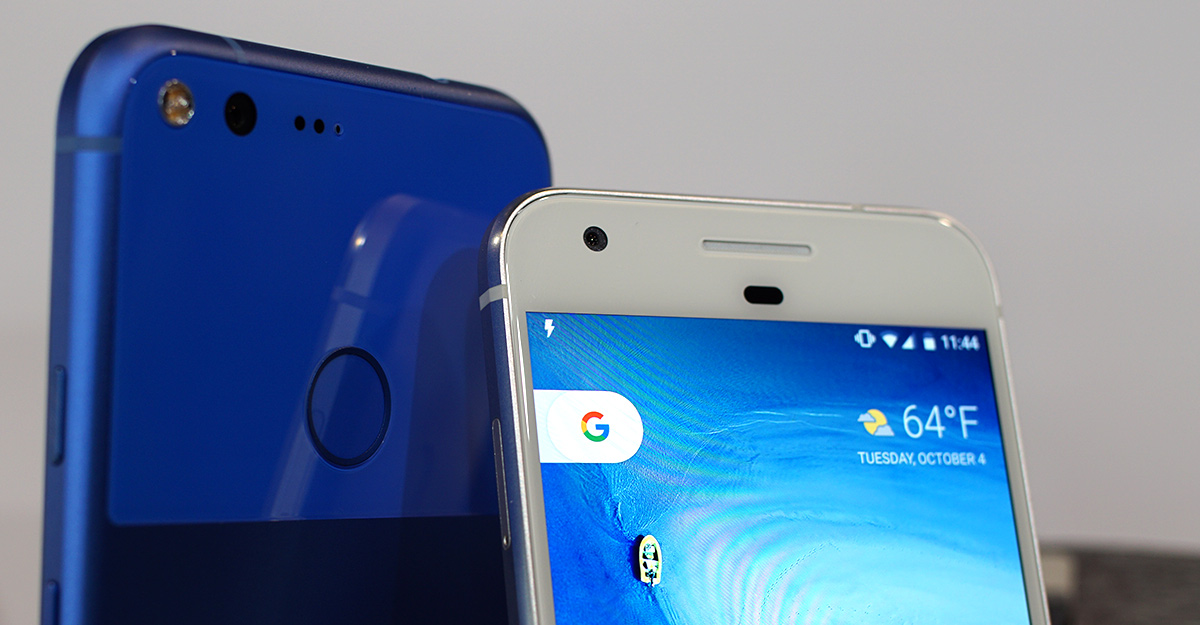 Both Pixels use wide-color gamut AMOLED displays, with Google claiming 100% NTSC coverage. Unfortunately, while poking around in the display settings panel, I did not see any options to adjust white point or change the display to sRGB mode. It's possible this option is hidden again in the developer settings. 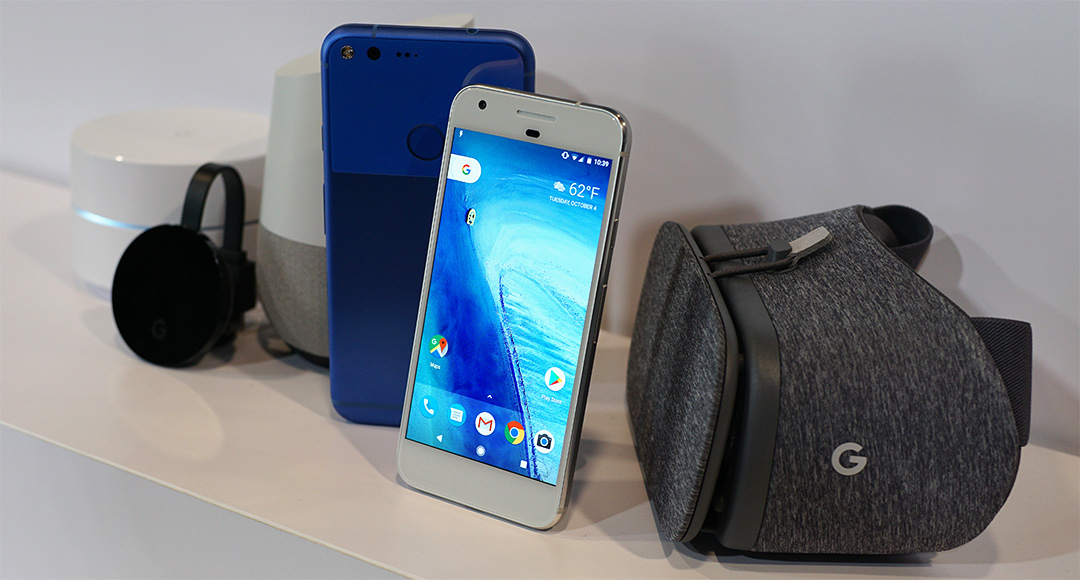 With prices starting at $649 for the 32GB, 5-inch version, Google is positioning its Pixel phones to compete with Apple’s and Samsung's flagships. This will no doubt disappoint Nexus fans who were hoping for a more affordable option. It's also a questionable strategy, considering the lack of brand awareness around Nexus/Pixel among the general public and Google's lack of retail exposure. Its alignment with Verizon should help, but I imagine it will be difficult to convince someone looking to buy an iPhone or Galaxy phone to buy a Pixel instead, especially when its premiere feature, the one advantage it has over every other Android phone, is timely software and security updates—not exactly a sexy selling point. For those who do value up-to-date software, and who do not want to tinker with custom ROMs, the new Pixel phones are the new price of admission.