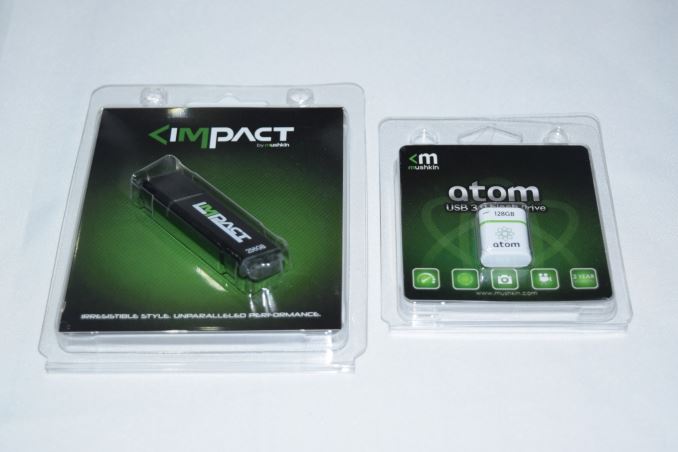 Flash drives are a dime a dozen these days, and most of them carry uninteresting specifications. In particular, flash drives advertising smaller physical footprints have tended to carry disappointing performance numbers. At CES 2016, Mushkin had two USB Flash Drives (UFDs) on display belonging to the 'small footprint' club, the Impact 256GB and the Atom 128GB. We have reviewed the Atom 64GB version before. Though we were unimpressed with the Atom's performance, the form factor was very intriguing. Last month, Mushkin showed that they had doubled the capacity while retaining the same form factor. Along with the Atom 128GB, Mushkin also showed off one of the smallest 256GB UFDs in the market, the Impact 256GB.

The industrial design of the Atom 128GB is the same as that of the 64GB version. It has a small hole at one end to secure it to a keychain or anything similar. The Impact is small too, and the picture below brings out the relative sizes. 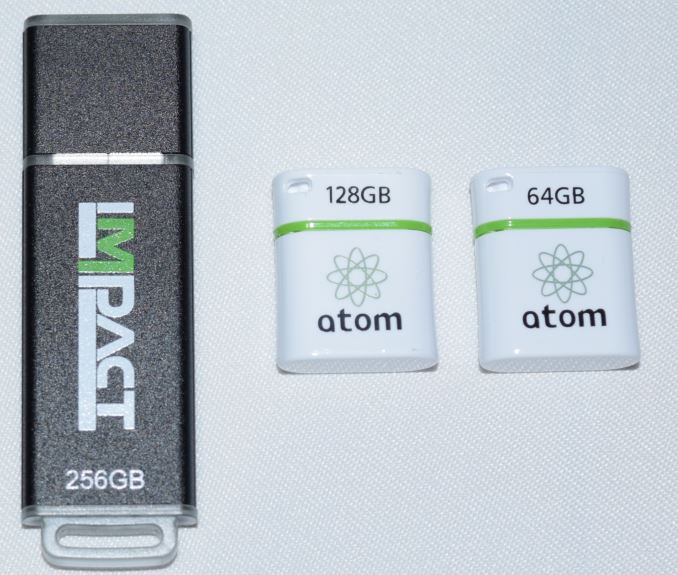 The smalled 256GB UFD that we have reviewed as yet is the Patriot Supersonic Rage 2. The Impact 256GB is of the same length, but has a slightly smaller width. It is highly improbable that the Impact 256GB might end up blocking any USB port adjoining the one it is connected to. 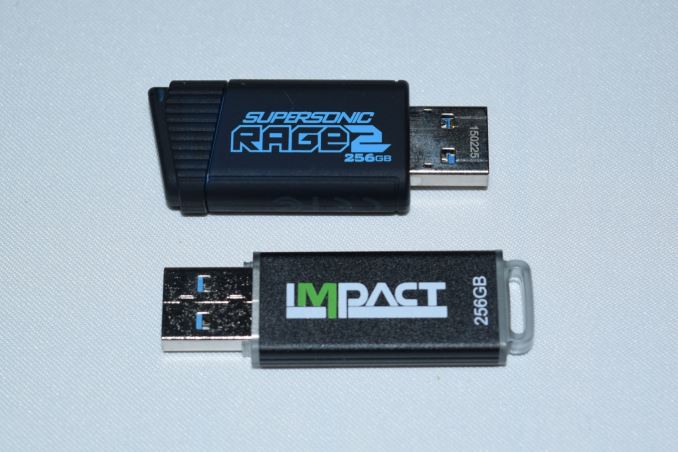 Unlike the Atom's plastic casing, the Impact also has an aluminum housing, and despite the lightweight nature, feels solid in hand. It also has a plastic tab at one end for attachment purposes.

Without opening up the unit, it is possible to identify the controller and flash inside the units. 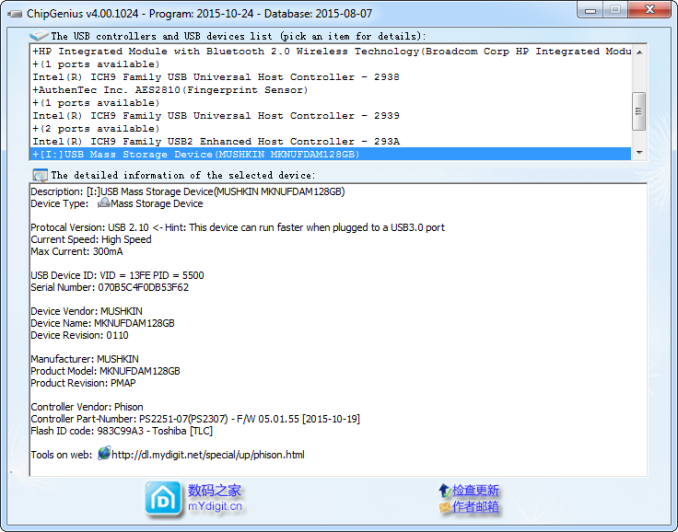 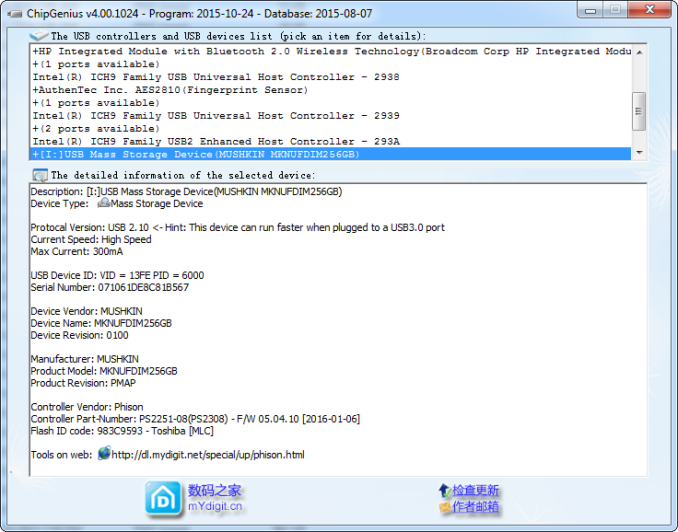 Evaluation of DAS units on Windows is done with the testbed outlined in the table below. For devices with a USB 3.0 (via a Type-A interface) connections (such as the Mushkin Impact 256GB and Atom 128GB that we are considering today), we utilize the USB 3.0 port directly hanging off the Z97 PCH.

Mushkin claims read and write speeds of 400 MBps and 310 MBps respectively for the Impact 256GB. The corresponding numbers are 180 MBps and 40 MBps for the Atom 128GB. These are unfortunately not hit with our default ATTO benchmark settings. In any case, these access traces are not very common in real-life scenarios. 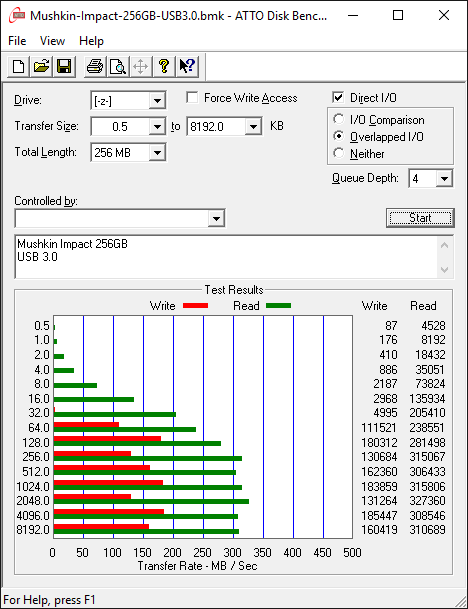 CrystalDiskMark, despite being a canned benchmark, provides a better estimate of the performance range with a selected set of numbers. Here, we can see things closer to Mushkin's claims - 375 MBps reads and 286 MBps writes for the Impact 256GB, and 191 MBps reads and 26 MBps writes for the Atom 128 GB. The native USB 3.0 flash controllers have always sruggled with very low IOPS for 4K random accesses (writes in particular). We see the Impact 256GB fall to 0.013 MBps for 4K random writes, while the Atom 128GB comes in at 0.071 MBps for that access trace. 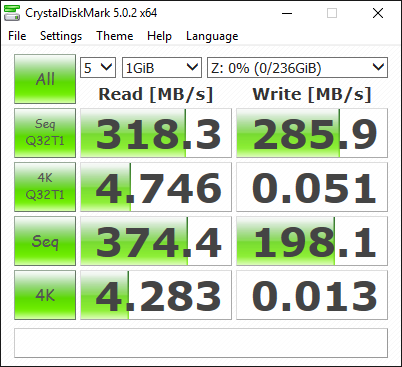 Our testing methodology for DAS units also takes into consideration the usual use-case for such devices. The most common usage scenario is transfer of large amounts of photos and videos to and from the unit. The minor usage scenario is importing files directly off the DAS into a multimedia editing program such as Adobe Photoshop. Since these are not portable SSDs, we will be disregarding the latter use-case. 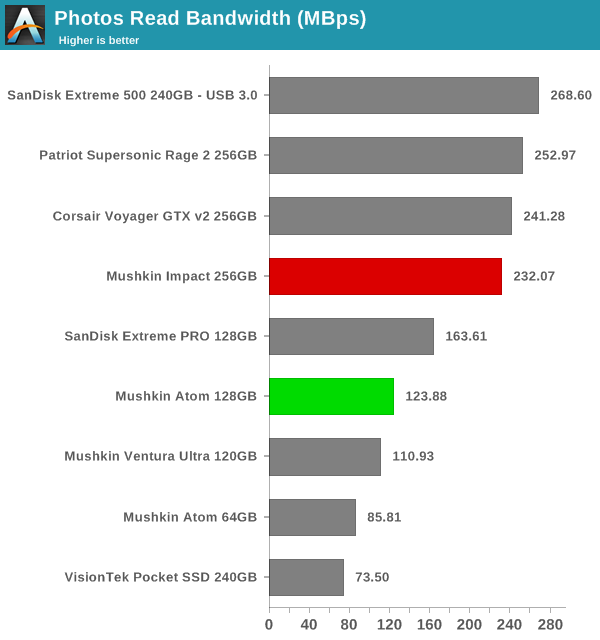 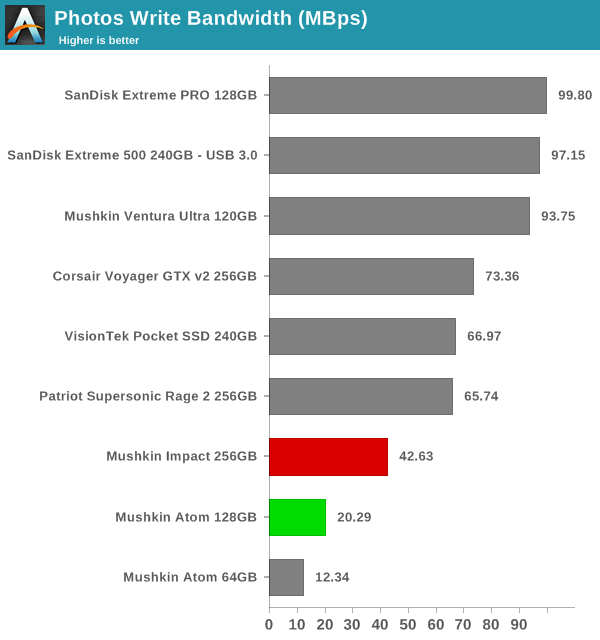 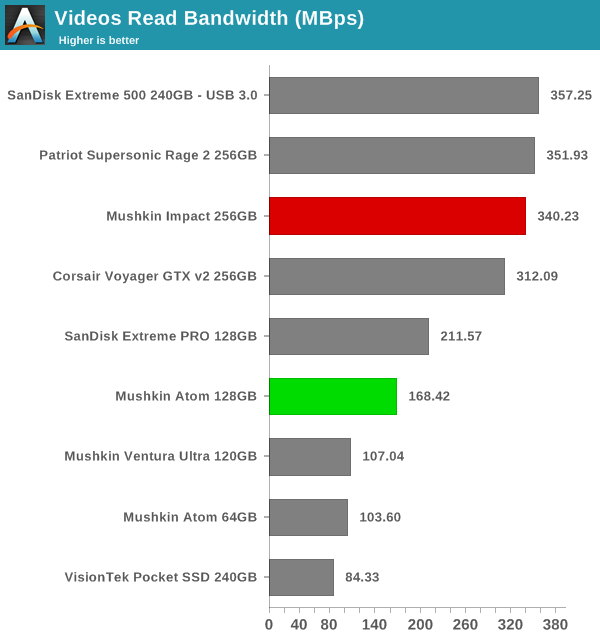 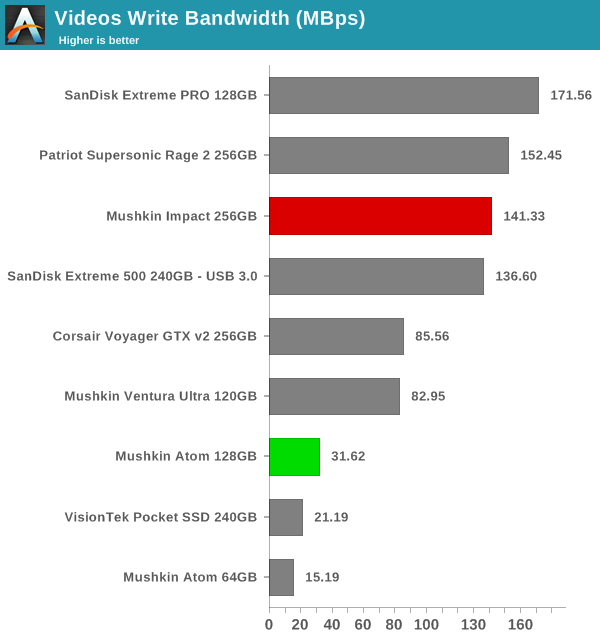 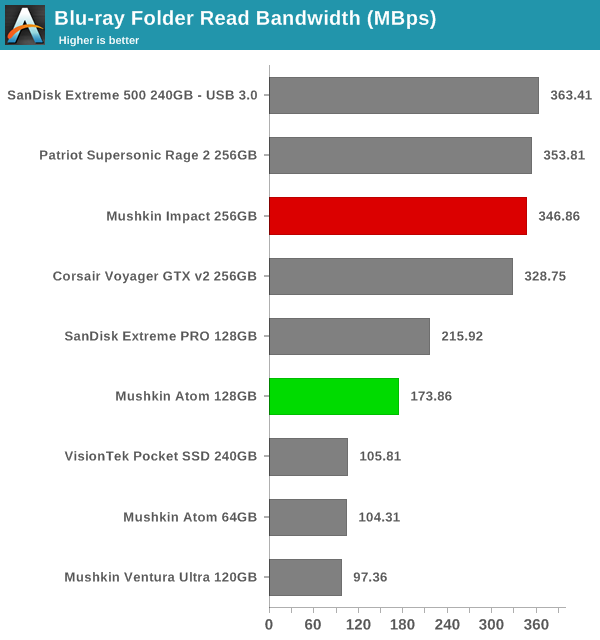 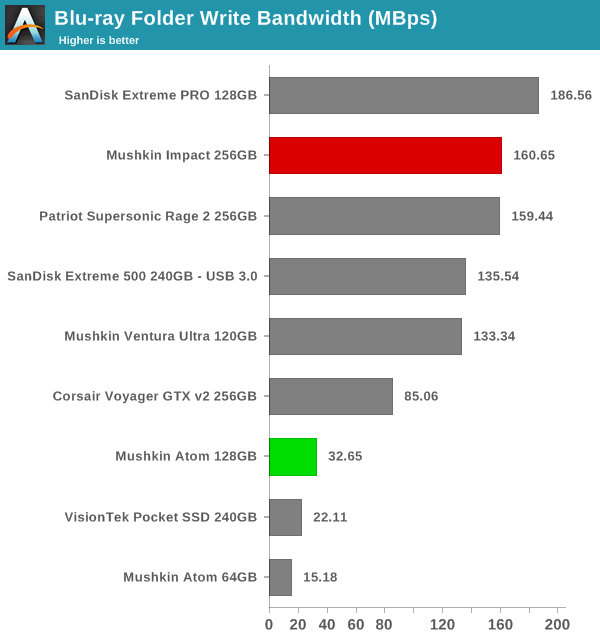 The benchmark numbers show a wide spread - for certain use-cases such as Blu-ray folder writes, the Atom and the Impact have top numbers in their respective capacity classes, but they also come in with disappointing numbers for use-cases such as copying over lots of photographs. Further down, we will see if the pricing can act as a redeeming aspect.

Yet another interesting aspect of these types of units is performance consistency. Aspects that may influence this include thermal throttling and firmware caps on access rates to avoid overheating or other similar scenarios. This aspect is an important one, as the last thing that users want to see when copying over, say, 100 GB of data to the flash drive, is the transfer rate going to USB 2.0 speeds. In order to identify whether the drive under test suffers from this problem, we instrumented our robocopy DAS benchmark suite to record the flash drive's read and write transfer rates while the robocopy process took place in the background. For supported drives, we also recorded the internal temperature of the drive during the process. Unfortunately, neither the Atom nor the Impact expose the temperature details. The graphs below show the speeds observed during our real-world DAS suite processing. The first three sets of writes and reads correspond to the photos suite. A small gap (for the transfer of the videos suite from the primary drive to the RAM drive) is followed by three sets for the next data set. Another small RAM-drive transfer gap is followed by three sets for the Blu-ray folder.

An important point to note here is that each of the first three blue and green areas correspond to 15.6 GB of writes and reads respectively. Throttling, if any, is apparent within the processing of the photos suite itself. The good thing here is that neither the Impact nor the Atom suffer from thermal throttling. 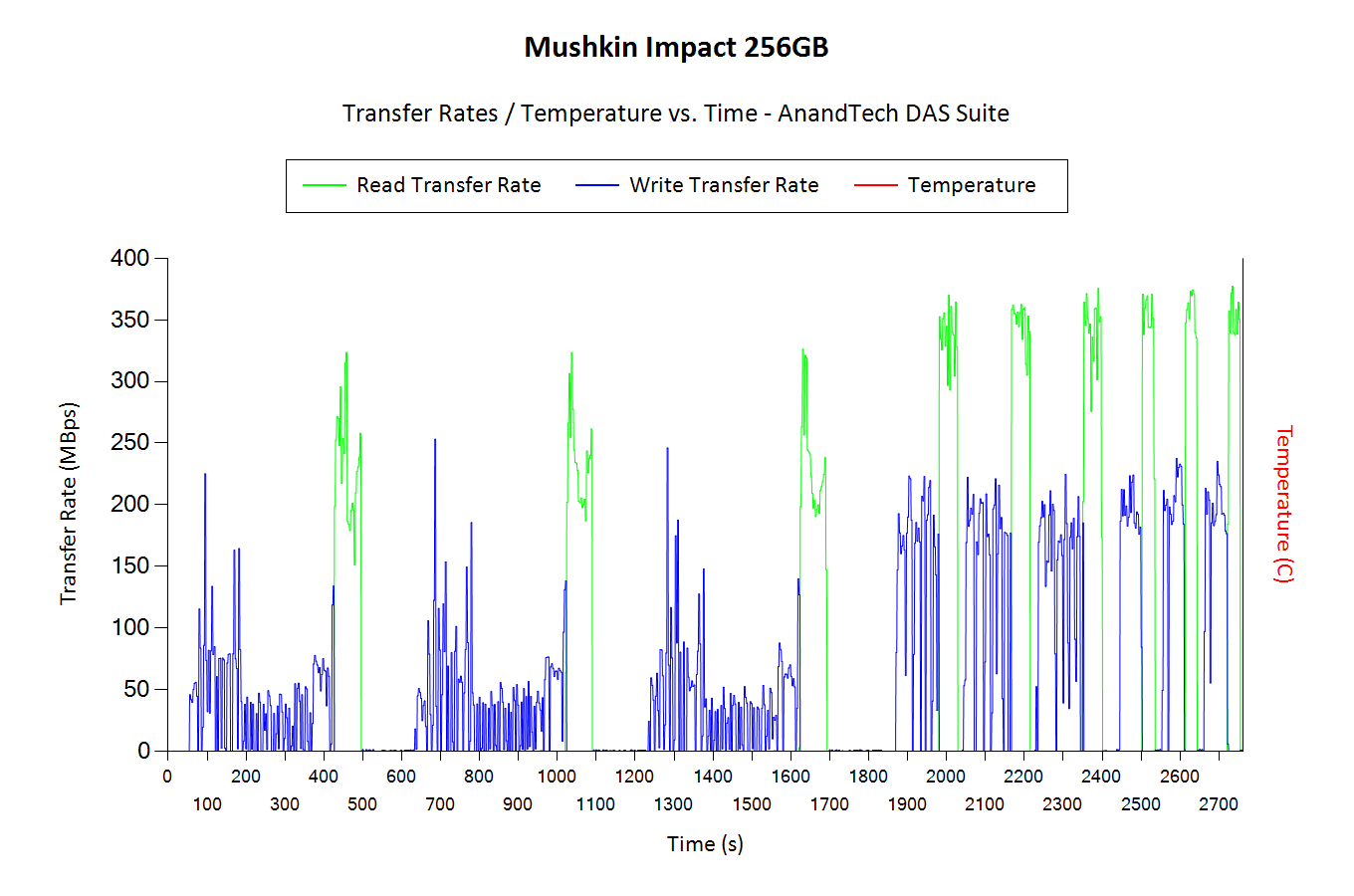 Coming to the business end of the review, the Impact 256GB and Atom 128GB continue Mushkin's tradition of improving the performance and capacity of their USB 3.0 flash drives every year, while retaining the same physical footprint.

The performance of the drives indicate suitability for write-once read-many scenarios. There are 128GB and 256GB portable SSDs (not in the same form factor, obviously) that have much better overall performance.Can the pricing save the day for Mushkin? We took a look at the online pricing of the various UFDs that we have evaluated so far and compared their cost per GB. 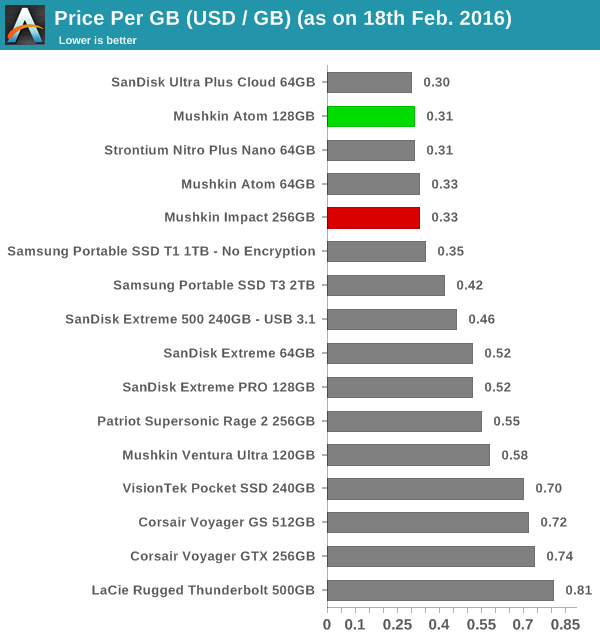 The Impact 256GB (priced at $85) is simply the most economical 256GB flash drive that we have seen so far. Given the $0.33/GB pricing, it is hard to not recommend it provided the use-case is appropriate. The Patriot Supersonic Rage 2 does provide better overall performance, but it comes in at $0.55/GB. At $40, the Atom 128GB is also the cheapest UFD in its capacity class that we have looked at in detail.

Overall, the Mushkin 256GB and Atom 128GB don't impress with their benchmark numbers. However, the pricing aspect more than makes up for the average performance.