Battery life is undoubtedly one of the most important parts of the user experience of any mobile device. One of the major reasons why many people use phablets is to get better battery life, as the PCB size of a phablet is often roughly similar to what you’ll see in a smartphone, but the battery will be bigger to fill the available space. As a result, a phablet has a higher proportion of battery than a smartphone. This inherently means that battery size will scale faster than platform power. In order to test this metric, we use a number of different tests ranging from display-bound web browsing to SoC-bound CPU and GPU load tests. In order to eliminate confounding variables, we test all devices from the same ASUS RT-AC68U router for WiFi testing, and in strong LTE/3G reception for mobile web browsing, in addition to setting all devices to an average of 200 nits on the display. 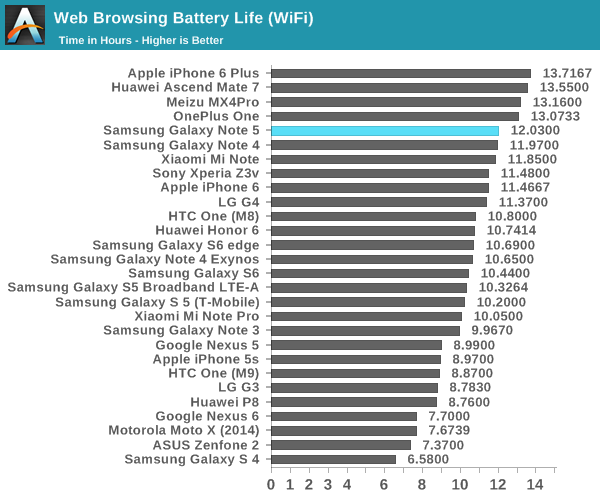 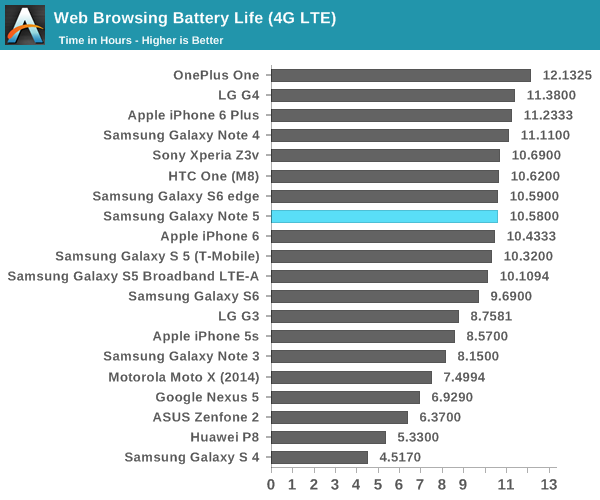 In LTE battery life, we see a noticeable drop relative to WiFi battery life. It’s likely that this is mostly due to the power consumption of the Shannon 333 modem present in these devices. There’s not much else to say here, but battery life is still good. 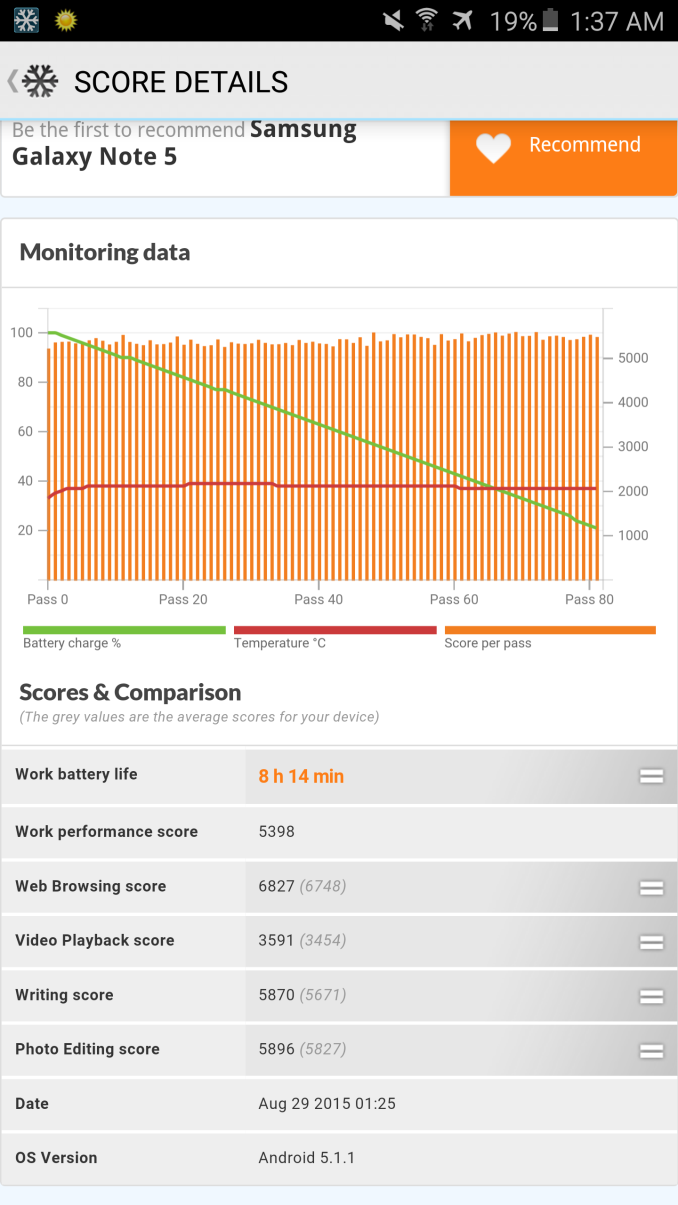 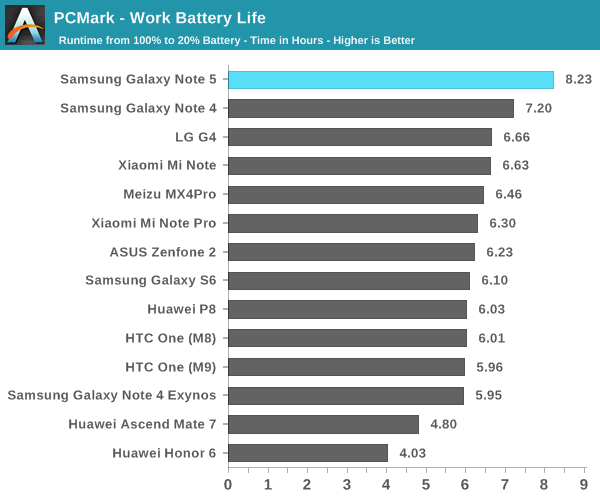 Moving past our mostly display-bound web browsing test, PCMark provides a much more balanced look at battery life as APL tends to vary a bit more with content like videos and photos instead of just webpages, and the CPU component is much more strongly emphasized. Here we can really see the Note5’s Exynos 7420 stretch its legs as it keeps a high performance level with long runtime. 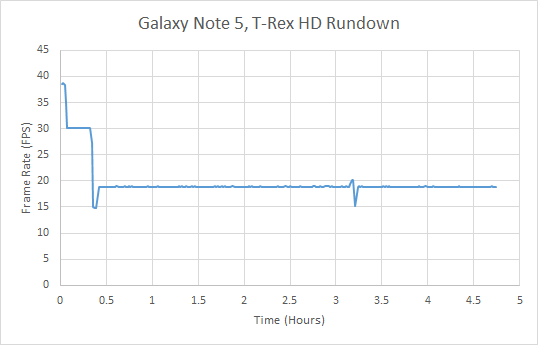 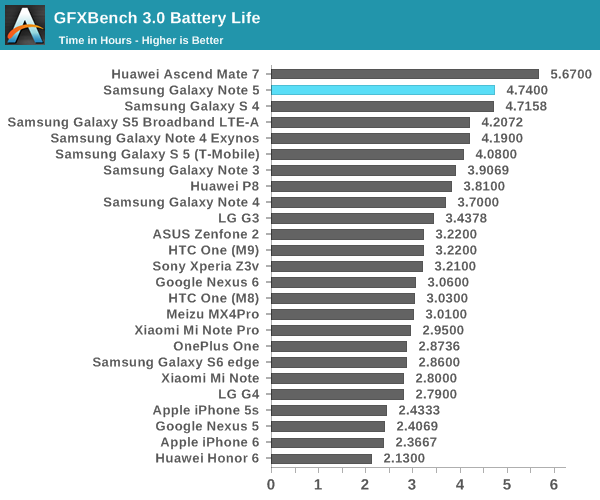 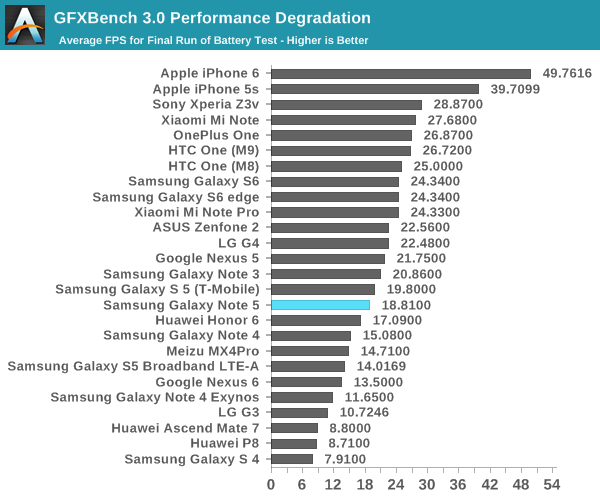 In our sustained SoC-bound workloads, GFXBench shows a healthy improvement over the Galaxy S6. Although we’re unable to test in perfectly controlled temperatures, it looks like Samsung has improved the throttling behavior of the SoC as the throttling appears to be more graceful rather than sinusoidal, and the result is a pretty significant jump in runtime over most devices. 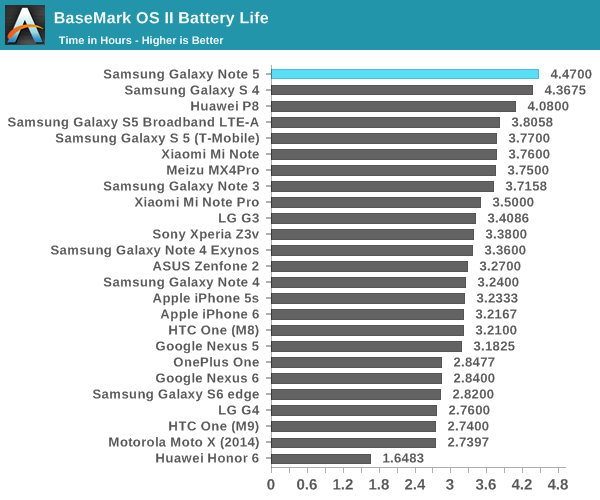 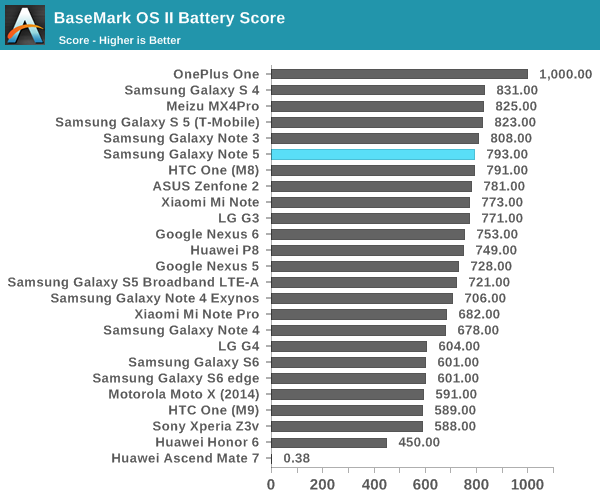 In Basemark OS II, we see a pretty significant uplift in runtime when compared to something like the Galaxy S6 or Note 4. The runtime increase isn’t just due to excessive throttling though, as the battery score shows that this isn’t just a case of throttling the CPU until the runtime is an improvement over past devices.

Overall, if you’ve read the Galaxy S6 review it’s pretty fair to say that you’ll know what to expect from the Galaxy Note5. Battery life is roughly equivalent to the Galaxy Note 4 despite the smaller battery, and due to the greatly improved Exynos 7420 SoC relative to 2014 SoCs SoC-bound cases will show pretty healthy improvements as long as you’re controlling for performance.

While normally battery life is the primary area of concern for a smartphone, in some cases it’s important for a phone to charge quickly. We can all claim to be perfect but one of the simplest cases for faster charging is forgetting to plug the phone in before going to sleep, so the maximum allowable charge time goes from something like 6 hours to an hour at best. As a result, a faster charger can dramatically improve practical battery life in any situation where you have limited time to charge. This can be accomplished by increasing either the current or voltage of the charger. The original quick charging standards improved charge rate through higher current, but this eventually hits a wall due to resistance in the wire. In order to increase the total amount of power delivered without increasing the thickness of the cable used voltage was increased in the case of newer standards like QC 2.0. In the case of the Galaxy Note5 and Galaxy S6 edge+, we’re looking at the same 9V, 1.67A QC 2.0 compatible charger that shipped with the Galaxy Note 4. In order to test this properly, we log the time it takes for the phone to charge by running a timer until the charger power draw hits a point that represents 100% battery. 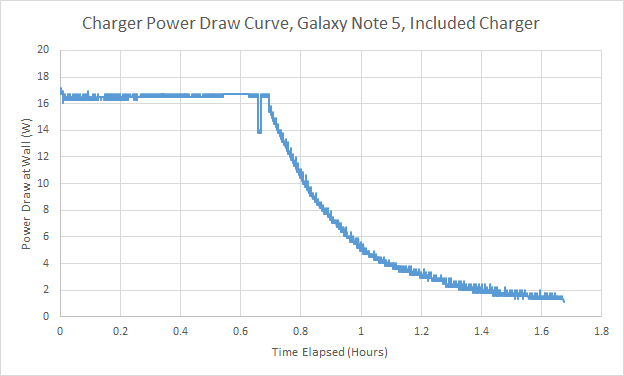 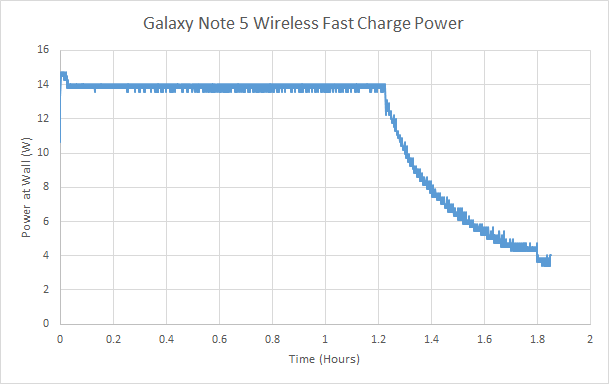 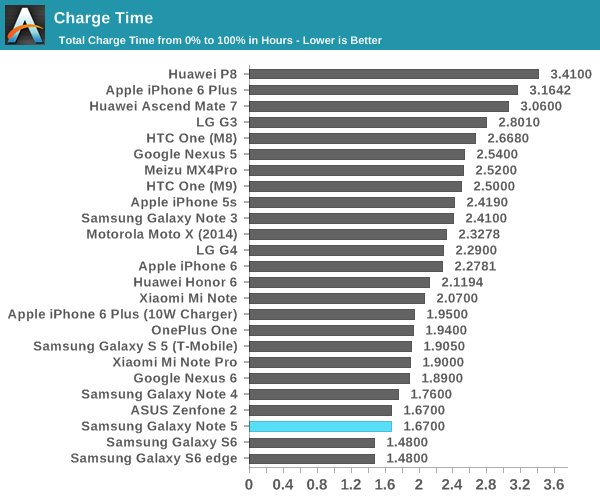 It probably isn’t a surprise, but charge time ends up similar to the Galaxy S6 and Galaxy Note 4. I suspect that we’ll be waiting until QC 3.0 to be able to see significant improvements as the current standard doesn’t have particularly fine-grained voltage scaling according to cable and phone conditions. Interestingly, the wireless fast charger is actually not too far off from the wired charger as it indicates 100% around 1.84 hours into charging which is almost identical to the wired fast charger.