Whether or not Apple's tablet experience is a desirable one is certainly open to debate, but it's hard to deny that the iPad still remains the tablet that all other tablets have to measure up to and are compared against. Last month Apple updated its iPad lineup with the new iPad Air 2 and iPad Mini 3, and removed the fourth generation iPad. As it stands, Apple has a larger selection of tablets than it has in the past, but whether or not some of them are worth buying is another story. Right now the entry price for an iPad is $249, and it scales as high as $829. For the purposes of these recommendations, we'll be evaluating the tablets based mostly on the base configuration, with additional consideration about the price of storage and cellular upgrades compared to other tablets.

For the most budget minded user, the $249 entry point buys you the original iPad Mini. This is effectively the same hardware platform that shipped with the iPad 2 in March of 2011. With its ageing specifications and low-resolution display, it's not something I would really recommend to anyone, even someone on a very tight budget looking for an iPad. An additional $50 makes things much more interesting, as $299 buys you the iPad Mini 2 which was originally launched as the iPad Mini with Retina Display. Although the display's color gamut is effectively the same as the original Mini, the 2048x1536 display is an enormous improvement over the original. The internal hardware is also superior, with Apple's A7 SoC that still seems to be holding its own a year after release. At $299, the iPad Mini 2 is definitely a worthwhile consideration, even if the color gamut leaves much to be desired. 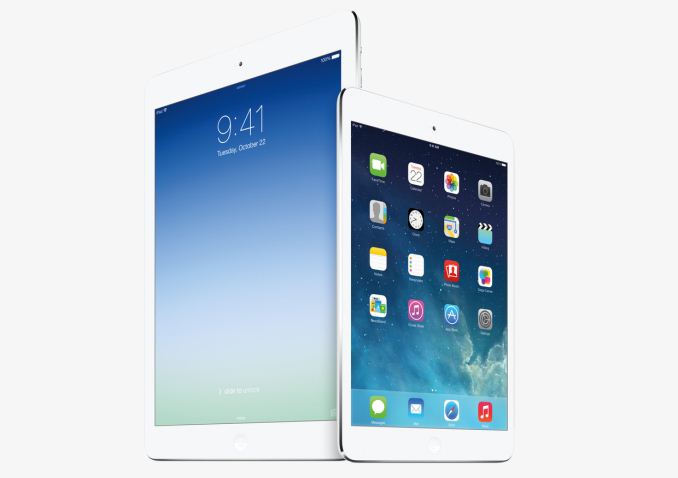 At the higher price points of $399 and $499 we have three different tablets. For $399 you can choose between the original iPad Air or the recently released iPad Mini 3, and for $499 you can get Apple's new flagship tablet, the iPad Air 2. With the $499 price point it's not really a difficult decision if you're set on buying an iPad, as the Air 2 is thinner and significantly faster than its predecessor. It also includes Touch ID which is a much more desirable feature with the recent launch of iOS 8 and Apple Pay, although not as much of a must-have feature as on a phone.

Choosing between the iPad Air and the iPad Mini 3 is more difficult, as both devices share the same overall specifications. The big differences are obviously the size, the superior display calibration on the iPad Air, and the inclusion of Touch ID on the Mini 3. The A7 SoC in the Air is also clocked 100MHz faster and maintains performance longer due to the heat spreader and lack of stacked RAM, but for most users this isn't going to have many real world implications. I think that I would lean toward the iPad Air as my recommended iPad for the $399 price point, unless the user really needs the smaller size and wants Touch ID. In all other circumstances, the Mini 2 provides the same small tablet experience as the Mini 3 at $100 less.

There's one more factor to consider, and that's the prices of the tablets after storage upgrades, as well as the availability of those upgrades. Apple's pricing scheme for NAND has traditionally been a 16GB base model, with an additional $100 bringing you to 32GB, $200 bringing it to 64GB, and more recently a $300 boost would bring the storage up to 128GB. With the launch of the new iPhones, and subsequently the new iPads, Apple adopted a new storage pricing scheme with the same 16GB base model, but with the $100 and $200 jumps bringing you to 64GB and 128GB respectively, which is a $100 reduction for both of those upgrades compared to the original cost. The iPad Mini 2 and iPad Air now have an upgrade to 32GB for $50, which I would consider a worthwhile investment as 16GB can disappear awfully fast on a tablet.

Overall, I would say that my recommendations are the iPad Mini 2 for the entry level spot at $299, the iPad Air at $399, and the iPad Air 2 as the flagship at $499. There are obviously considerations to make about size and storage, but in general I think these are the best devices that Apple offers at their respective price points.