In the UI department, there’s not too much to talk about. Much like Motorola, NVIDIA has stuck to using the AOSP UI design. Of course, there are plenty of NVIDIA-specific applications, but I didn’t run into any issues using the tablet to do everyday tasks. In this respect, things have improved massively over Shield portable. Because this tablet works in both portrait and landscape, there aren’t any issues with applications that force portrait mode like there were with the Shield portable. In normal tablet usage, it works as one might expect, with no real perceived lag throughout the UI. Of course, this is when compared to other Android devices. There are still frame drops involved in scrolling through lists and similar areas where Android has traditionally struggled to stay smooth, but Android L should fix this issue for the most part. 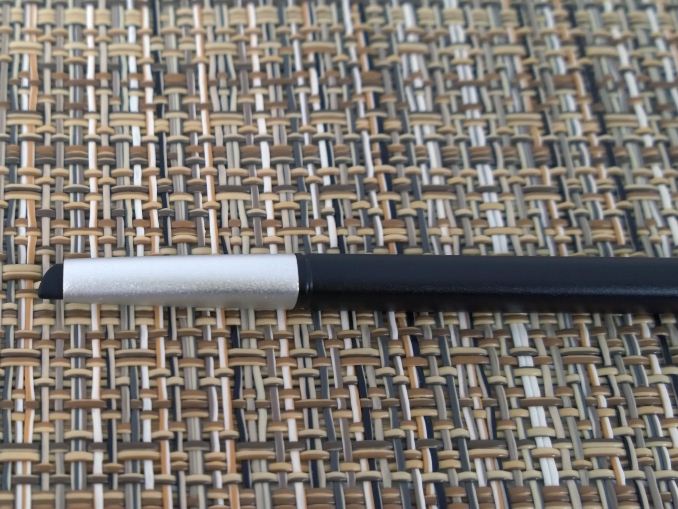 The real value that the Shield tablet brings as a tablet is the stylus functionality. DirectStylus 2 is definitely much, much better than any other capacitive stylus on the market. The tip allows for precise control and it’s definitely responsive to changes in pressure. For the most part, there are only small issues here. Because the stylus is capacitive, it’s not really possible to have a floating pointer the way Wacom styluses do. In addition, I noticed that I need to lift the stylus a bit more than I might with pencil and paper in order to start a new letter or word or else my words would start to flow together. For the most part though, it works well enough, and the inking latency is low. Unfortunately the issue here is more of ecosystem than hardware, as most stylus-enabled applications aren’t nearly as robust as OneNote on Windows x86. 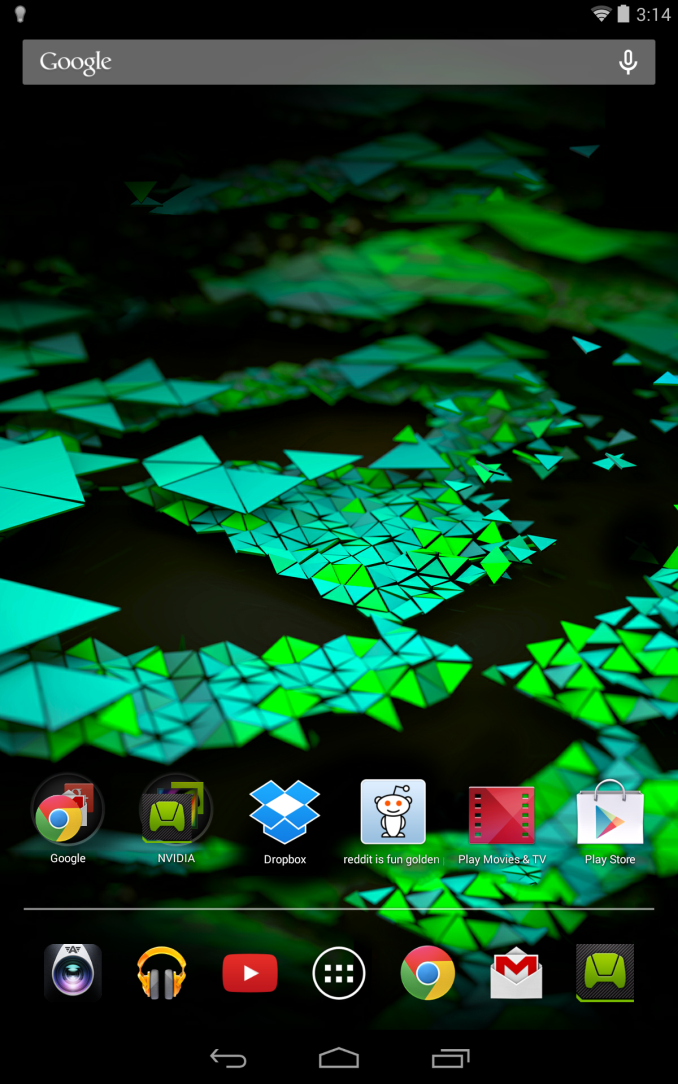 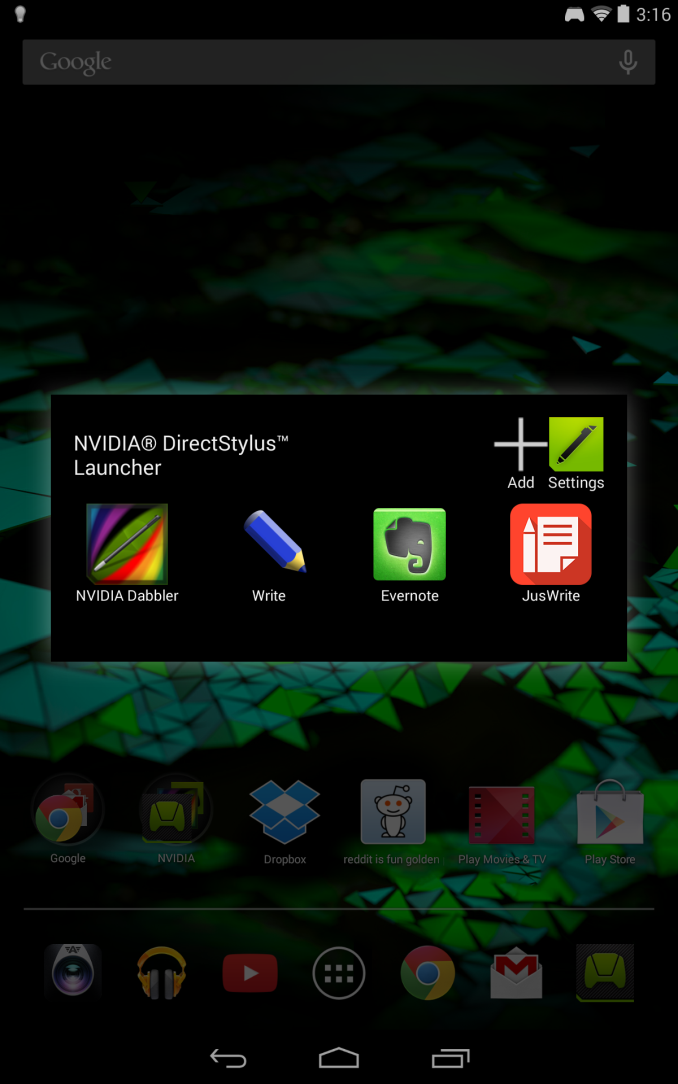 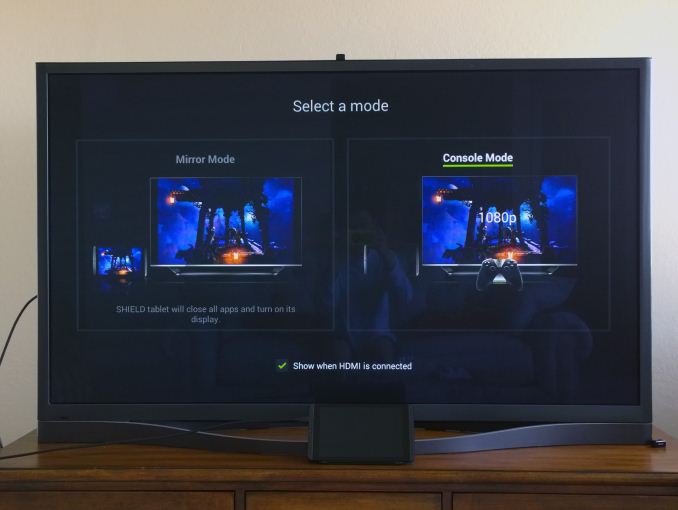 Of course, the real question here is whether the gaming side is worth the price premium. NVIDIA has gone all out on this area, and their efforts are split up into multiple aspects. The first is the TV interface/console mode, then the gameplay recording feature known as ShadowPlay. Finally, there’s the aspect of GameStream and GRID, which make it possible for games to be played on the tablet that otherwise wouldn’t work due to the compute requirements. 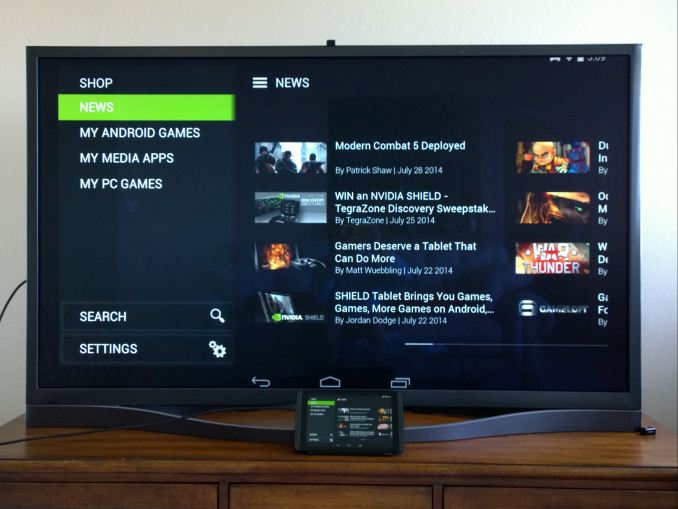 The TV interface effectively boils down to Shield Hub and Google Now, although it’s fully possible to use the full tablet UI as desired in this mode. In the hub, launching games and various applications like YouTube and Netflix is rather simple compared to the more cumbersome full Android UI as they have their own category in Shield Hub. In addition, launching applications through Google Now works as expected. Overall, there aren’t any friction points here. It works as well as one could expect. There is a strong reliance on voice input in general, but it’s much better than trying to type with a controller and better than most smart TV experiences. While the TV interface is mostly targeted towards enabling a console gaming experience, YouTube and Netflix both work great in this mode. NVIDIA has also gone through the necessary DRM certification process to allow for 1080p Netflix streaming. In essence, this device is already ready to serve as an Android TV device.

ShadowPlay, which we first saw in GeForce GTX GPUs, is also another major advantage that NVIDIA brings to the table for software experience. In short, this leverages the hardware H.264 video encoder that is on the Tegra K1’s Kepler GPU to provide video capture of gameplay or anything else displayed by the tablet. There are three possible options for video capture. The first is Twitch broadcasting, something that NVIDIA is quite proud of as they are the first to implement such a feature in an Android tablet. While I personally don’t stream on Twitch, a demo of Twitch broadcasting in the initial launch briefing worked without any visible quality issues in either audio or video.

There are two other recording modes. One is a standard start/stop recording feature, but the other is ShadowPlay/Auto Recording. In short, this keeps anywhere from the past minute to 20 minutes in video. This makes it possible to set and forget about the recording feature rather than constantly managing recordings in manual mode. All of these modes can use the tablet’s microphone and front facing camera for commentary purposes as needed. Local recordings seem to have a maximum of 1080p30, and Twitch broadcasts are limited to 720p30. 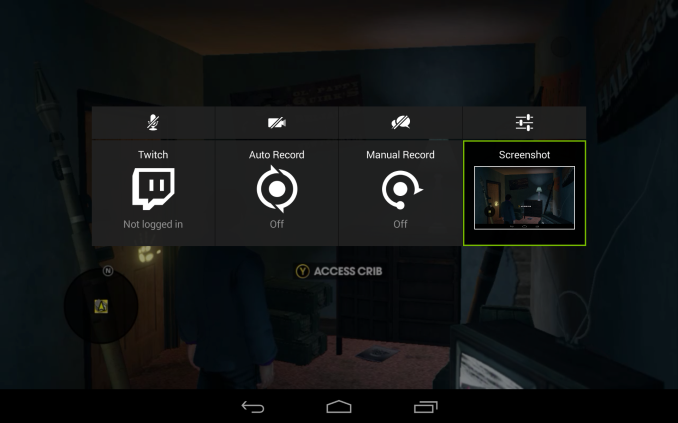 While those are the technical details, it’s a painless process. All the user has to do is long press the back button on the controller and select what kind of a recording they’d like to do (Twitch, Auto, Manual, Screenshot) and that’s it. I can see significant potential in this area especially if this device takes off as a gaming platform.