As the core count of modern CPUs is growing, we are reaching a time when the time to access each core from a different core is no longer a constant. Even before the advent of heterogeneous SoC designs, processors built on large rings or meshes can have different latencies to access the nearest core compared to the furthest core. This rings true, especially in multi-socket server environments.

But modern CPUs, even desktop and consumer CPUs, can have variable access latency to get to another core. For example, in the first-generation Threadripper CPUs, we had four chips on the package, each with 8 threads, and each with a different core-to-core latency depending on if it was on-die or off-die. This gets more complex with products like Lakefield, which has two different communication buses depending on which core is talking to which. 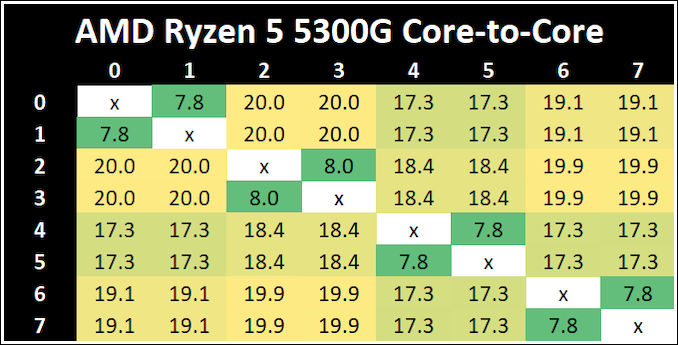 One other angle to examine is how much power each core is drawing with respect to the rest of the chip. In this test, we run POV-Ray with a specific thread mask for a minute, and take a power reading 30 seconds into the test. We output the core power values from all cores, and compare them to the reported total package power.

The peak per-core power is shown as 15.2 W when one core is loaded on the Ryzen 7 5700G, and that comes down to ~8.8W when all cores are loaded. Interestingly this processor uses more power when six cores are loaded.

Both AMD and Intel over the past few years have introduced features to their processors that speed up the time from when a CPU moves from idle into a high-powered state. The effect of this means that users can get peak performance quicker, but the biggest knock-on effect for this is with battery life in mobile devices, especially if a system can turbo up quick and turbo down quick, ensuring that it stays in the lowest and most efficient power state for as long as possible.

One of the issues though with this technology is that sometimes the adjustments in frequency can be so fast, the software cannot detect them. If the frequency is changing on the order of microseconds, but your software is only probing frequency in milliseconds (or seconds), then quick changes will be missed. Not only that, as an observer probing the frequency, you could be affecting the actual turbo performance. When the CPU is changing frequency, it essentially has to pause all compute while it aligns the frequency rate of the whole core. 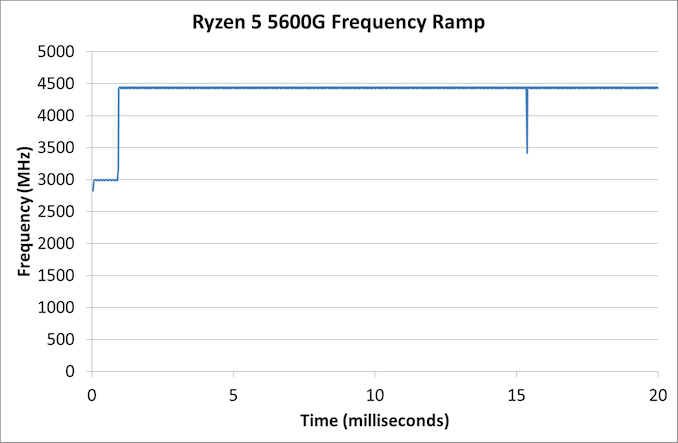 In our test, the Ryzen 5 5600G jumps from 2700 to the turbo frequency in around a millisecond.