When it comes down to system tests, the most obvious case in point is power consumption. Running through our benchmark tests and the IPMI does a good job of monitoring the power consumption every few minutes. We managed to see a 747 Watt peak listed, however the graph to run a few quick last photos for this reviews is showing something north of 750W. 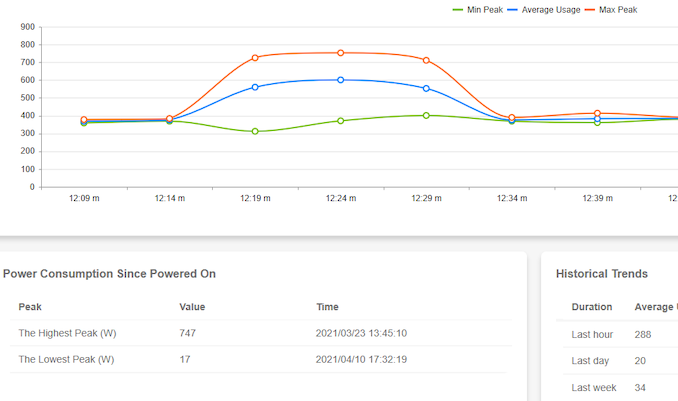 750W for a fully loaded dual 28C 2x205W system sounds quite high. This system has a peak of 1200W on the power supply, so that leaves 500W for an AI accelerator and anything additional. This means a good GPU and a dozen high power NVMe drives is about your limit. Luckily that's all you can fit into the system. Users who need 270 W processors in this system might have to cut back on some of the extras.

One of the elements in which to test this system at full power, and if we look at the processor power consumption we get about 205 W per processor (which is the rated TDP) during turbo. 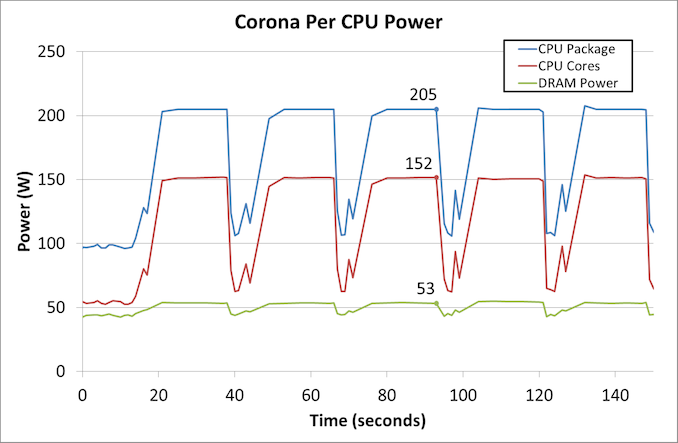 Out of this power, it would appear that the idle power is around 100 W, which is split between cores/DRAM (we assume IO is under DRAM?). When loaded, extra budget goes into the processors. We see the same thing on CineBench, except there seems to be less stress on the DRAM/IO in this test. 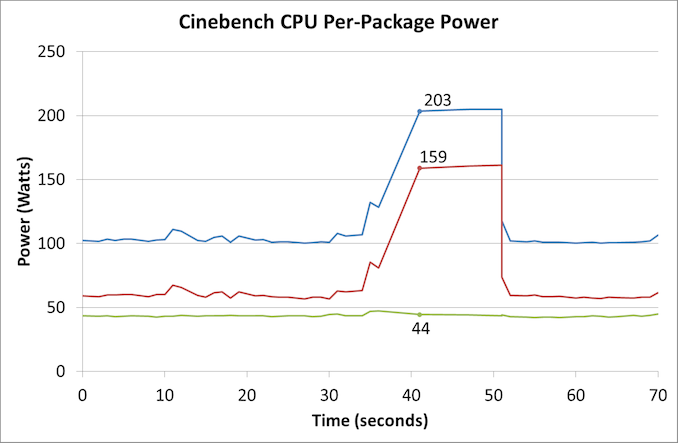 While we don't have a series of server specific tests, we are able to probe the capability of the system as delivered through mix of our enterprise and workstation testing. LLVM compile and SPEC are Linux based, while the rest are Windows, based on personal familiarity and also our back catalog of comparison data. It is worth noting that some software has difficulty scaling beyond 64 threads in Windows due to thread groups - this is down to the way the software is compiled and run. All the tests here were all able to dismiss this limitation except LinX LINPACK, which has a 64 thread limit (and is limited to Intel).

In almost all cases, the dual socket 28C SYS-120U-TNR sits behind the single socket 64C option from AMD. For the tests against dual 8280 or dual 6258R, we can see a generational uplift, however there is still a struggle against a AMD's previous generation top tier processor. That said, AMD's processor costs $6950, whereas two of these 6330s is around $3800. There is always a balance between price, total cost of ownership, and benefits versus the complexities of a dual socket system against a single socket system. The benchmarks where the SYS-120U-TNR did the best were our AVX tests, such as 3DPM and y-cruncher, where these processors could use AVX-512. As stated by Intel's Lisa Spelman in our recent interview, "70% of those deal wins, the reason listed by our salesforce for that win was AVX-512; optimization is real".