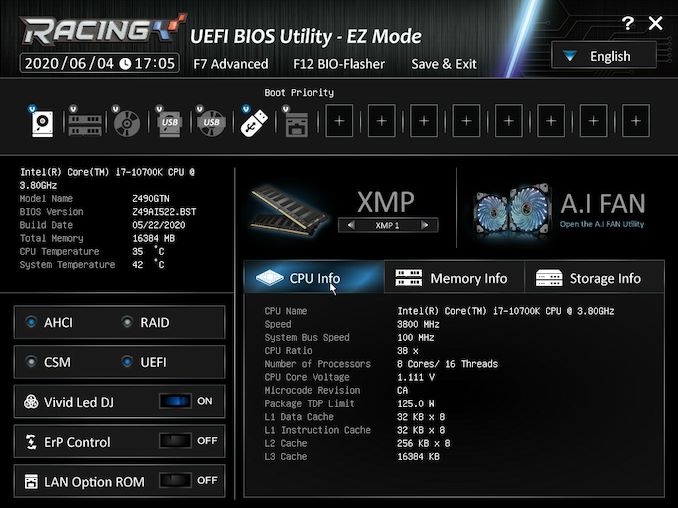 The advanced mode has six primary menus including main which displays basic information, the advanced section which contains all of the storage, and CPU configuration options. The chipset menu has options for the boards PCIe control and integrated graphics settings, while the Tweaker menu contains all the boards overclocking settings. This includes CPU setting including CPU ratio options, base clock options, voltage options and memory tweaking settings. The Z490GTN has its own Vivid LED DJ RGB utility within the firmware which is easy to use but has limited options compared with some vendors. With the latest version of the firmware, it also has an A.I Fan utility which allows users to set custom fan curves on the boards three 4-pin fan headers.

The Biostar firmware is very user friendly and follows the boards theme. Experienced tweakers and enthusiasts won’t find much in the way to tweak, but it does contain plenty of function with the basic Vivid DJ RGB utility which is a nice addition to Biostar’s firmware. All of the basics are present and overclocking a processor with this board is a simple task. It’s intuitive, well laid out, and it has all the necessary tools required to overclock both the CPU and memory.

Accompanying the Biostar Racing Z490GTN is a small set of applications, which is spearheaded by the Biostar Racing GT software. This acts as the main hub and amalgamates software such as the Vivid LED DJ RGB utility, the A.I fan function, as well as a basic hardware monitor and basic processor overclocking functions. 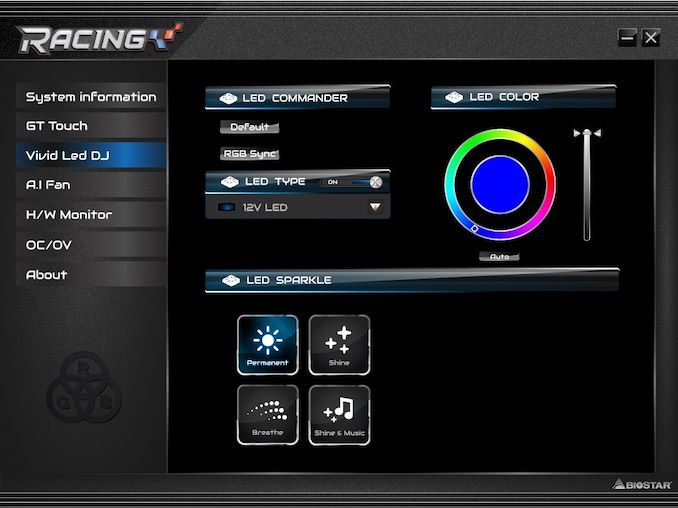 The most prominent piece of software is the Biostar Racing GT utility which combines multiple pieces of software including A.I Fan, Vivid LED DJ, and Biostar's in Windows overclocking utility. The OC/OV sections allow users to perform basic overclocks on the Z490GTN with options for increasing the CPU core frequency in 100 MHz increments, as well as on the fly CPU Vcore voltage adjustment. The Vivid LED DJ offers RGB customization of the integrated RGB headers, while the A.I fan area allows users to set custom fan profiles, or use the three presets which include quiet, aggressive, or full-on.

Also included in the software bundle is a basic and archaic BIOS update utility which allows the board to be updated to the latest firmware via an online update, or through manually selecting a BIOS file. For users looking to make auditory adjustments, there is Realtek's Audio Manager which is a basic and fully functioning utility which allows users to make a variety of adjustments. These include environment based presets like padded cell and bathroom, as well as audio format options and basic room correction for multi-speaker setups. It's a budget board with a budget set of software, but it's functional and more than enough to deal with.