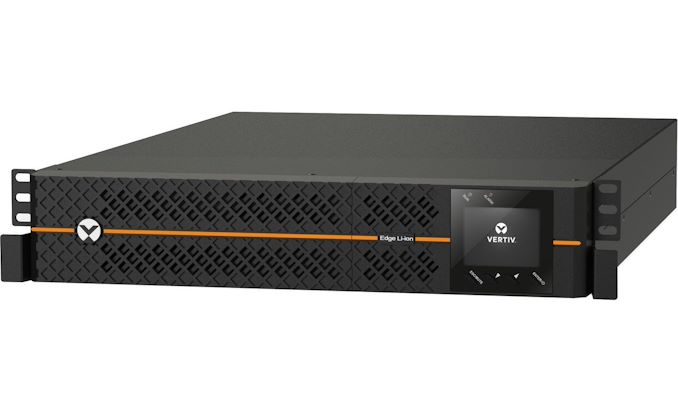 Continuing our initial forray into the world of UPSes, today we're taking a look at our second UPS – and our first lithium-ion based unit – Vertiv's Edge Lithium-Ion. The rackmount-capable UPS comes with a focus on high quality and high efficiency, allowing the 1500 VA unit we're reviewing today to power loads as high as 1350 Watts, a hefty amount for a relatively modestly-sized UPS.

Even though Vertiv is a brand name that most home PC users are unaware of, they are one of the oldest and largest IT infrastructure design & manufacturers on the planet. The original company was founded in the US back in 1946 and evolved alongside the very first computers, developing cooling and power solutions for critical IT infrastructure. Today Vertiv is a company with 19 manufacturing sites worldwide and annual revenues greater than four billion USD.

Despite the company’s size and reputation, Vertiv was almost entirely focused on industrial and critical applications, neglecting the home/retail market. More recently, in the past few years, the company has been shyly taking steps downwards, trying to capture pieces of the enthusiast segment of the home/office PC market.

The subject of today's review, Vertiv’s Edge Lithium-Ion 1500 VA UPS, is one of the simpler and less expensive products that the company produces. Even so, its features and specifications are greatly superior than the vast majority of consumer-grade UPS available today, owing to Vertiv's design heritage as well as the fact that this is unambiguously (and unabashedly) a high-end UPS in every sense of the word. Especially with the high cost of lithium-ion batteries, Vertiv has made sure to build a high-quality unit around that battery, all of which is reflected in the £950+ ($1200+) retail price tag.

The Edge Lithium-ion family comes in three capacities; at 1500VA, what we're reviewing today is actually the smallest of the family. Still, with a 240 Wh battery and a power delivery system rated to be 97.5% efficient, the 1500VA Edge can run at a full, 1350W load for almost nine minutes, and much longer still with lighter workloads.

The Edge Lithium-ion lineup is designed for 230V systems, and while Vertiv offers similar units for the 120V market, they don't have a North American equivalent of the Edge. Still, if not for the printed specifications you'd be hard pressed to tell that the unit is designed for any given region, as the 6 battery-backed sockets are all IEC C14, rather than a regional wall socket like Schuko (Type F). Similarly, the UPS uses a C13 socket as an input, rather than relying on an integrated power cable.

Vertiv supplies the Edge Lithium-Ion 1500 VA UPS in an aesthetically simple but very sturdy cardboard box, with the unit protected by thick packaging foam slabs. Inside the box, we found both standard plastic feet and rack mounting adapters, two load cables, a USB interface cable, and AC power cables. Vertiv is the only company we have ever encountered that supplies all three AC cable formats (US, UK, and EU) alongside with their product. 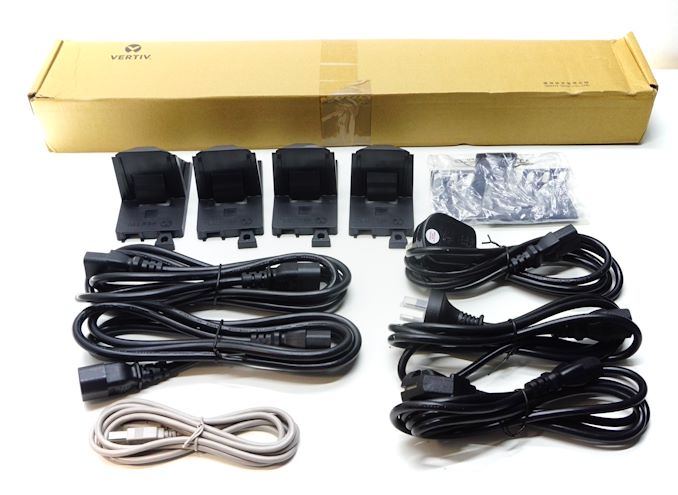 Vertiv claims that their Edge Lithium-Ion series is relatively compact. That said, the 1500 VA version measures 438 mm × 410 mm × 86 mm (W × D × H), which is not particularly compact for a UPS with that kind of output. But at the same time, since the Edge lineup is designed to be rack-mountable, there's not much else the designers could do to limit the UPS's size given the width requirements.

The Edge Lithium-Ion has a power factor of 0.9, meaning that it can output up to 1350 Watts.

The LCD screen of the UPS can always be turned on, even if the UPS has been turned off, as long as there is even a tiny bit of charge left in the batteries. Once on, the screen will display a mimic diagram of the unit’s operational status and basic electrical figures, such as the input and output voltage and frequency, and the battery’s status and estimated runtime. 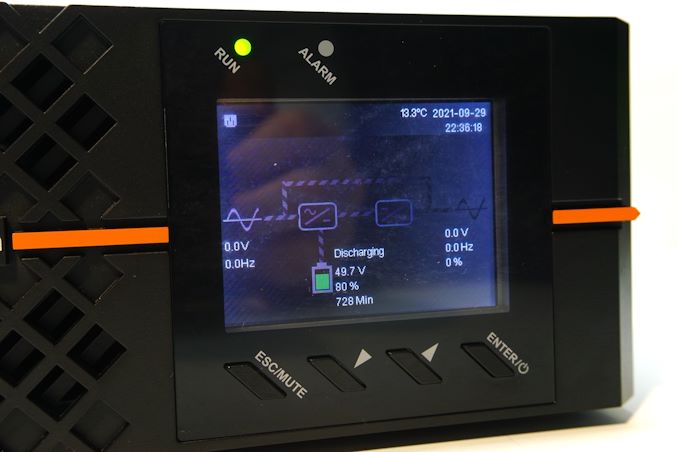 At the rear side of the unit, there is a standard single AC power input IEC C14 plug and six C13 output plugs. Three of the six output plugs are SPI programmable, allowing for condition-based control via the unit’s software. A simple but effective restorable circuit breaker is placed right next to the input plug. The unit has a standard USB port for direct-to-PC connectivity, as well as an optional intellislot interface that is unlikely to be of any use to home and small business users. EU users should note that the UPS differentiates the Phase and Neutral input wires. Certain EU connectors, with Schuko connector being the prime example, do not differentiate these two wires. If the AC connector is inserted into the socket with the Phase and Neutral wires inversed, the UPS will inform the user to rotate the plug. If you see that error and you are using a non-rotatable plug, then you probably require a licensed electrician to fix your electrical installation. 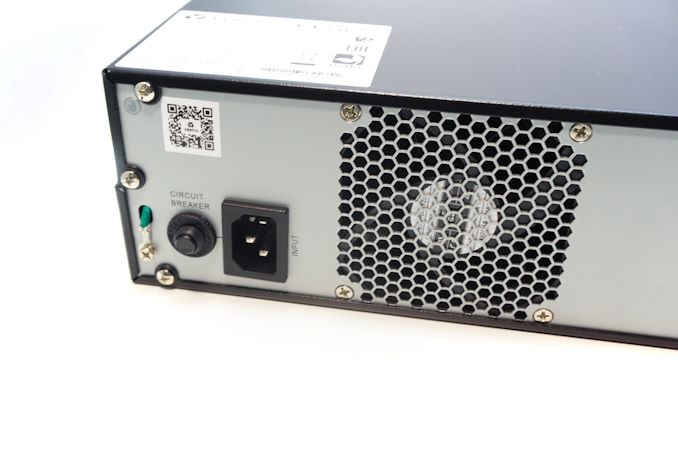 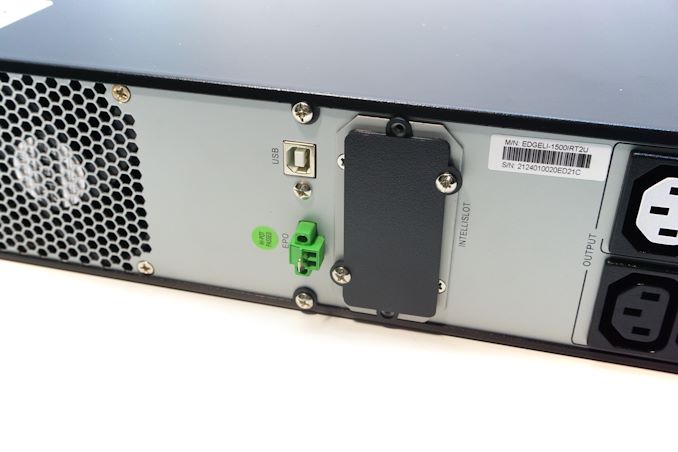 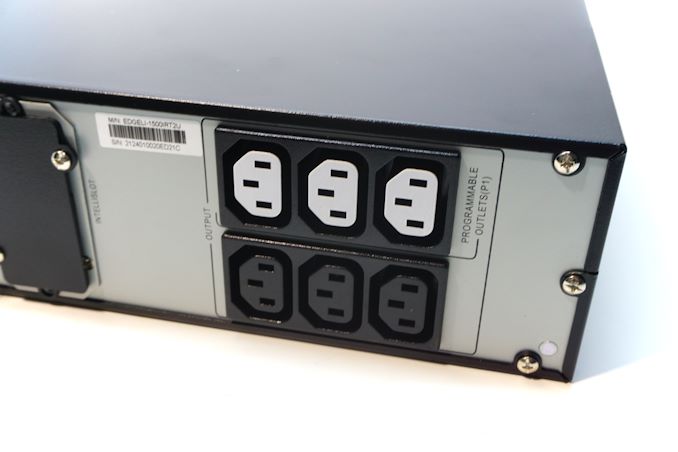 There is a single fan in the unit, which will only turn on while the batteries are in use – either when the UPS is running on battery power, or when it's charging its batteries. The speed of the fan is variable while the unit is running on battery power, allowing the unit to maintain very low acoustic levels when lightly loaded. However, the fan will burst at maximum speed immediately when the AC power is restored and will stay at maximum speed until the batteries are fully charged. As the battery runtime is much shorter than the battery charging time, I'd argue that this design defeats the purpose of having a variable fan speed controller to begin with.

As is the usual practice with slim UPS designs, most of the front fascia is a door that can be removed to access the battery compartment. Vertiv designed the door to latch magnetically and can be removed without the use of tools, revealing the beefy connector that connects the batteries to the main unit. The battery is hidden behind a metal shield, essentially forbidding its removal if the connector is joined. Removing the shield though does require a Philips screwdriver, negating the toolless approach of the front panel. 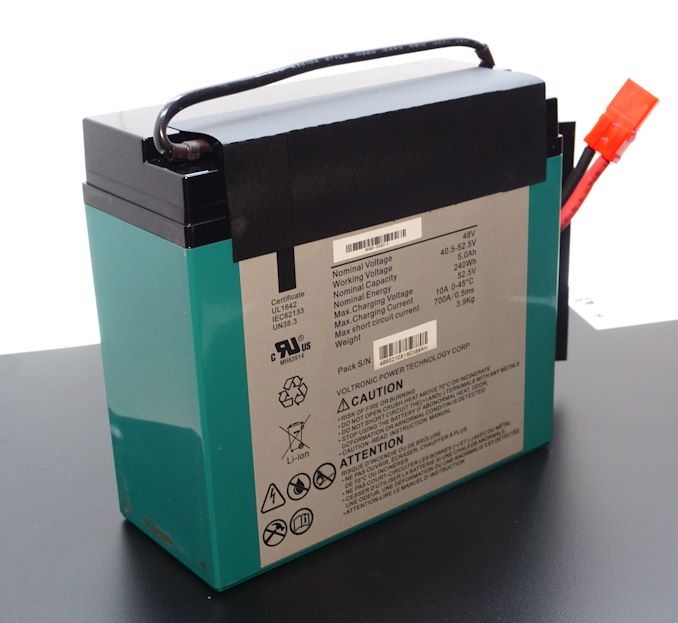 The battery practically is the main feature of this UPS, with the series utilizing lithium-Ion batteries. These are significantly more expensive than common lead-acid UPS batteries, but they have impressive specifications for their size and will greatly outlive those typical lead-based products. The one in the 1500 VA version of the Vertiv Edge weighs less than 4 kg and still has a capacity of 240 Wh. Even though the lithium-Ion battery is definitely more expensive than lead-acid batteries of the same capacity, Vertiv claims that the longevity of the lithium-Ion battery makes it economically feasible. And and much as we'd like to put those claims to the test, the best we can do is take Vertiv's word on the matter for now, as this battery is not yet even available in retail. 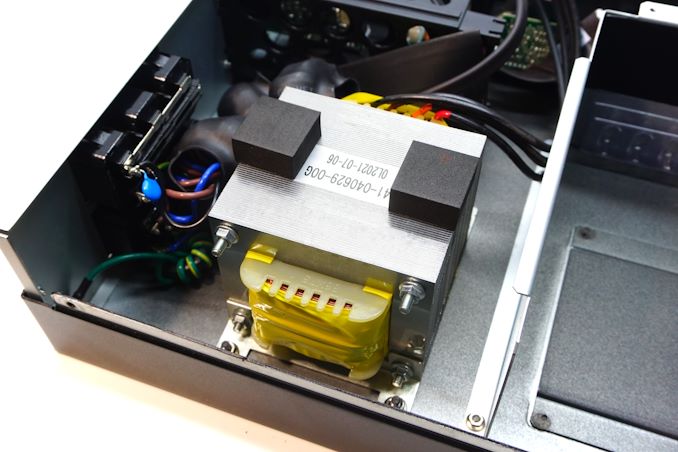 Opening up the chassis reveals a large transformer near the AC outlets and circuitry across the top side of the unit. This is a classic approach for narrow designs. The transformer is cooled via the chassis itself, receiving minimal to zero airflow from the fan. 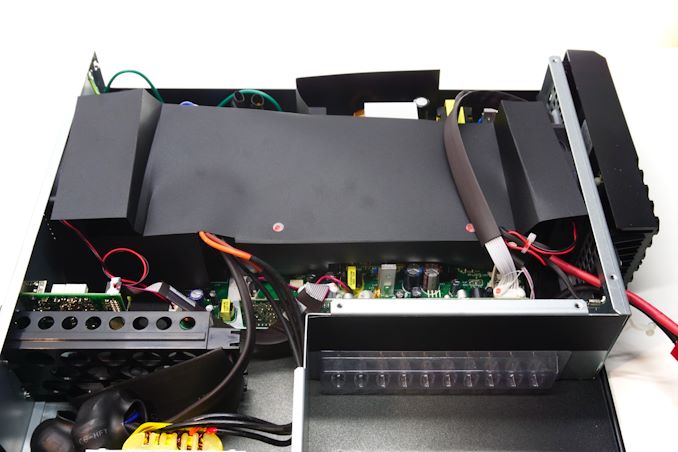 The circuitry is mostly covered under a paper cover that forms a wind tunnel, enhancing the cooling properties of the UPS. Using paper to form wind tunnels is a proven technique but most enthusiasts would expect something of higher quality in such an expensive top-tier UPS. 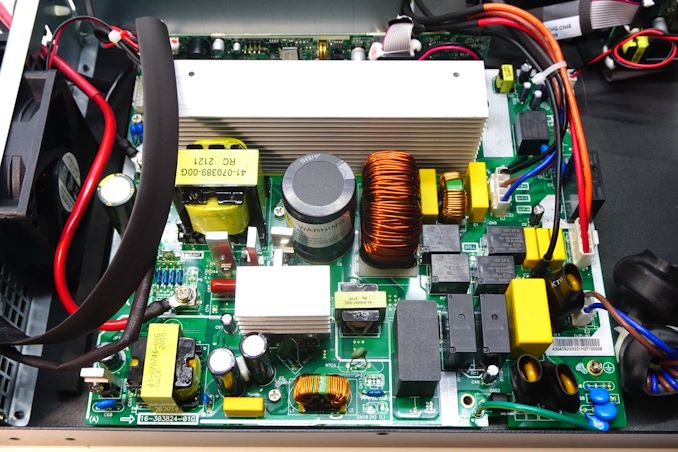 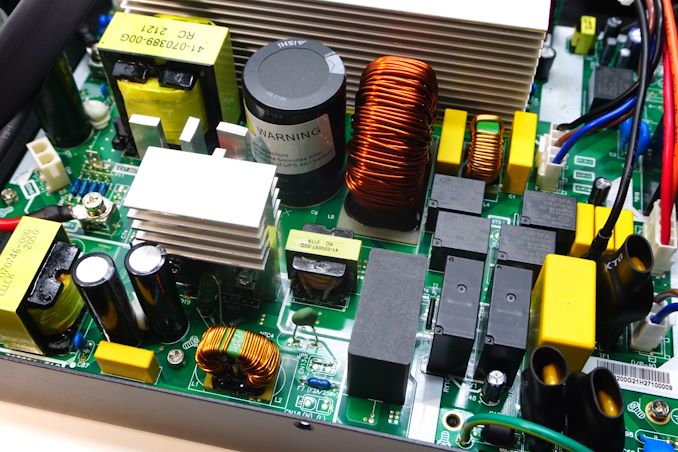 The power circuitry is impressive in terms of quantity and oversizing, but not really so in terms of quality. The main 450V/470μF capacitor is supplied by Aishi, a fairly reputable manufacturer but not one that we would expect to see in such a classy product. The smaller capacitors are a mix of Jamicon, Aishi, and Elite – all middle-tier manufacturers that we rarely see the products of in anything better than mainstream PSUs. 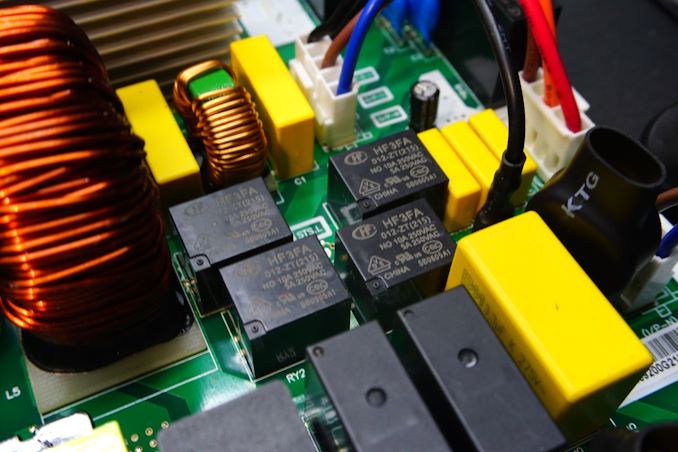 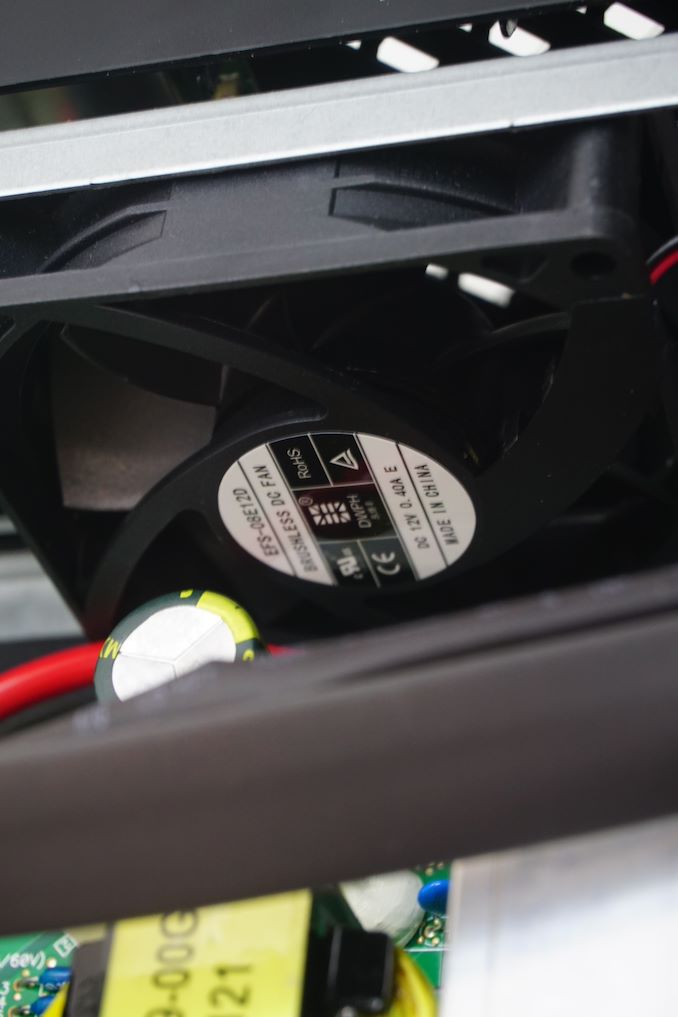 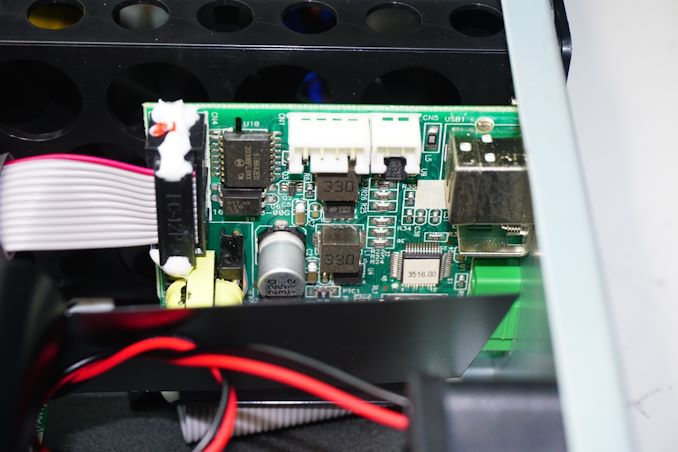 The relays are supplied by Hongfa, a broadly known and experienced Chinese manufacturer. The fan is also supplied by Dongweifeng, a Chinese manufacturer whose products we sometimes see in industrial equipment but never in top-quality consumer products. Searching around the PCB, one can also easily notice the connector for an external battery.

We have to note that the UPS market is not as exposed as the PSU market, therefore designers are not normally put under the microscope about who they source their primary components from. Reputable manufacturers are reputable for good reasons, but using parts from them is often done just as much for optics and marketing as it is for actual quality. It will definitely be some time before we see UPS designs with just top-quality parts in them. 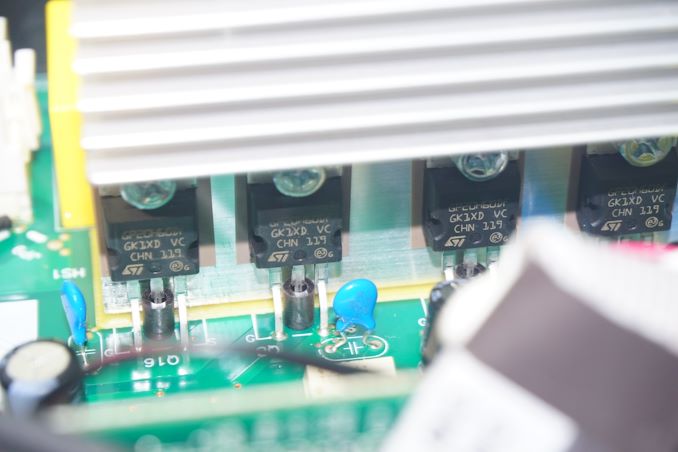 The heart of the power circuitry is eight ST Microelectronics STGP20H60DF insulated-gate bipolar transistors (IGBTs). These are premium components, being very high speed IGBTs with very low losses, as well as an excellent temperature coefficient. In layman’s terms, these are capable of generating a nearly perfect sine waveform and maintain it even when heavily loaded. 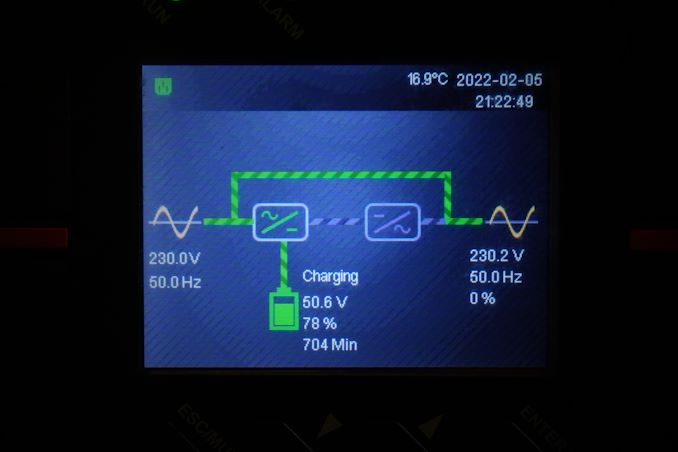 By default, the LCD screen displays a mimic diagram of the unit’s current status and operation. It also displays basic information, such as the chassis temperature, the date, the time, and the condition of the battery. The display turns itself off after a few seconds of inactivity and will come on again only when a button is pressed. It is also worthwhile to note that the unit has an orientation sensor and the LCD will, by default, automatically adjust its orientation depending on whether the unit is placed vertically or horizontally.

The Vertiv Edge Lithium-Ion, being a high-end product, offers advanced configuration options via its LCD screen. Users can adjust the input sensitivity, the output voltage and frequency, as well as advanced battery management options. There is even a setting that allows for rudimentary temperature compensation for the battery’s parameters, which may be useful for situations where the UPS is placed somewhere that can get overly hot or cold.