Modern high-performance processors implement a feature called Turbo. This allows, usually for a limited time, a processor to go beyond its rated frequency. Exactly how far the processor goes depends on a few factors, such as the Turbo Power Limit (PL2), whether the peak frequency is hardcoded, the thermals, and the power delivery. Turbo can sometimes be very aggressive, allowing power values 2.5x above the rated TDP.

In simple terms, processor manufacturers only ever guarantee two values that are tied together - when all cores are running at base frequency, the processor should be running at or below the TDP rating. All turbo modes and power modes above that are not covered by warranty. Intel kind of screwed this up with the Tiger Lake launch in September 2020, by refusing to define a TDP rating for its new processors, instead of going for a range. Obfuscation like this is a frustrating endeavor for press and end-users alike.

However, for our tests in this review, we measure the power consumption of the processor in a variety of different scenarios. These include workflows, real-world image-model construction, and others as appropriate. These tests are done as comparative models. We also note the peak power recorded in any of our tests.

First up is our image-model construction workload, using our Agisoft Photoscan benchmark. This test has a number of different areas that involve single thread, multi-thread, or memory limited algorithms. 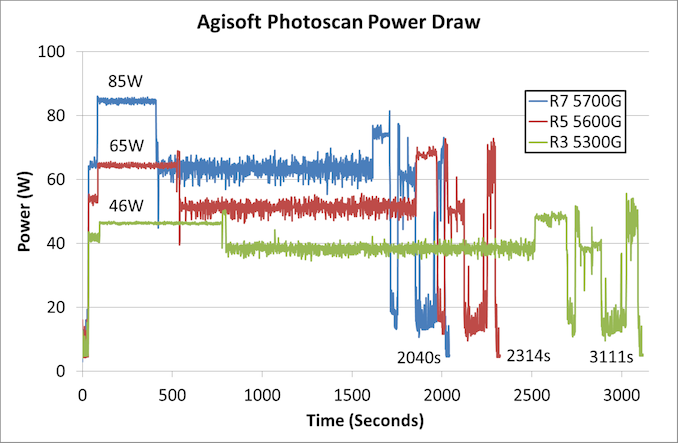 For the Ryzen 7 5700G, the most power-hungry part of the test is right at the beginning, where we’re seeing peaks of 85 W. For the 5600G, that first section goes to 65 W, but the peaks actually occur here near the end of the test. The 5300G also has peaks later in the test, but that first section is the lowest, running only at 46 W.

The second test is a sustained rendering workload. 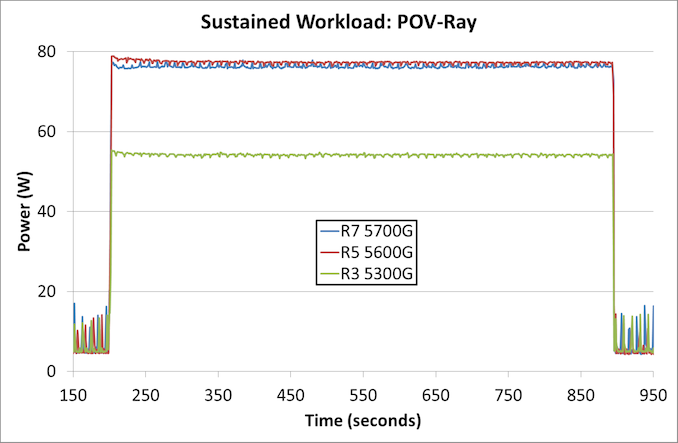 For peak power, we report the highest value observed from any of our benchmark tests. 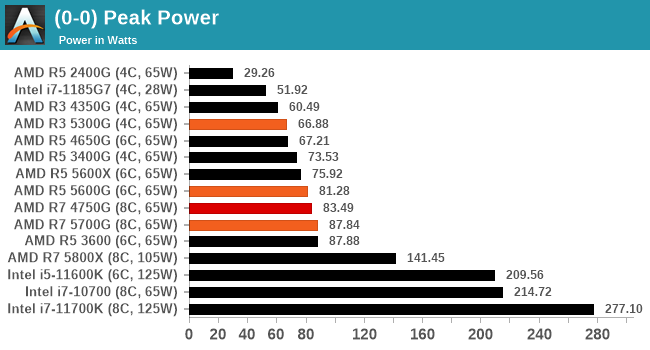 While all three processors have a TDP rating of 65 W, by default on AMD systems the Package Power Tracking, which is the limiting factor here, is 88 W. The Ryzen 7 is practically at that value, while the Ryzen 5 just goes a smidge over 80 W. The Ryzen 3 on the other hand only matches its TDP in the worst-case scenario.